With international talks on climate change in Copenhagen just two months away, Caritas has called for a global response to the issue which is threatening the homes and livelihoods of some 75 million people in the Asia/Pacific region. 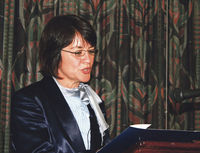 The secretary general of Caritas Internationalis, Lesley-Anne Knight, told around 65 people in Wellington last month that some villagers in Kiribati have already been forced to move their houses to retreat from the rising sea and the poor everywhere would be hit first.
‘The implications for us all—and particularly for you here in New Zealand, surrounded by millions of vulnerable people—are truly worrying. A global solution is urgently needed.’

Ms Knight, who visited the newest branch of the Catholic Church’s aid and development agency Caritas Samoa last month, would be attending the world climate change talks in Copenhagen in December representing Catholics throughout the world.

Many development advances of recent years could be set back by the effects of climate change. Livelihoods, food security and social cohesion are under threat.
‘And that is why it is vitally important that climate change policies are inextricably linked with those of development’.
‘If the cost of carbon reduction programmes is met from existing overseas aid budgets, this will represent a double whammy for the world’s poor—not only will they suffer the worst effects of climate change for which they are least responsible, but they will also lose out on development aid intended to help them lift themselves out of poverty.’

Meanwhile, the Climate Change Response (Moderated Emissions Trading) Amendment Bill has passed its first reading and been referred to the Finance and Expenditure Committee for report by November 16. The deadline for public submissions is October 13.

Maori Party climate change spokesperson, Te Ururoa Flavell, said as the Bill was introduced on September 24 he was concerned that no account was taken of the impact of climate change on households.
He expected any scheme would take account of obligations to land and environment under the Treaty of Waitangi and that the poorest citizens would not be unfairly disadvantaged.
‘We are committed to ensuring that a full array of assistance measures will be considered and targeted at rural communities, lower-income households and other members of our community who are likely to be more vulnerable to the impacts of climate change. Those same individuals will be less likely to meet the costs involved’ (For Te Ururoa Flavell’s speech, go to www.scoop.co.nz/stories/PA0909/S00395.htm).

The scandal of poverty

Naming world poverty as a global scandal, Ms Knight said that around 230,000 people died as a result of the Asian tsunami in 2004, but this same number of people die every five days as a result of poverty.
‘The number of deaths directly attributable to poverty is equivalent to losing more than four times the population of New Zealand each year.’

We in Aotearoa New Zealand are in one of the world poorest regions. The Asia Pacific region is home to half of the world’s poor and includes 14 of the world’s least developed countries.
‘In Papua New Guinea and Timor-Leste, you have two of the poorest countries in the world, ranked 149 and 158 respectively out of 179 countries on the UN’s Human Development Index. In PNG a third of the population lives below the poverty line, 5.5 per cent of babies will die before they are two and those that survive will be lucky to make it to their 60th birthday.’

Yet the outpouring of generosity after the tsunami in which a record 7.5 billion US dollars was donated by the general public around the world to help those affected, including 19 million dollars from individual New Zealanders, shows people support the giving of aid.