The tragedy of the human suffering which leads to suicide is not being loved or not knowing that you are loved. Fr Richard Taylor of Angelicum University in Rome told the Sisters of Compassion during a seminar in Whanganui last month that Christianity is the only religion that really addresses the issue of human suffering. 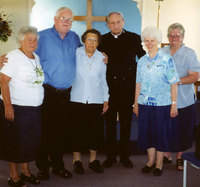 During the seminars leading up to centenary celebrations of the opening of the Home of Compassion in Island Bay (to be held 27–29 April), Fr Richard talked of ecumenism and the richness that has come with the Vatican’s release of several scholars to work on the literature with those from other religions. He said this work of biblical interpretation is bringing the different religions together.

He gave historical background into the schisms in the Church, looking at Martin Luther and the publication in 1517 of his 95 theses criticising the Church’s practice of selling indulgences, among other perceived corruptions, which began the Protestant Reformation, and the Catholic Church’s response in the Council of Trent, convened three times between 1545 and 1563.

Fr Richard also talked of how the evangelists used language and symbolism to mediate deep truths of God and humanity. Referring to the parables of the Good Samaritan and the Prodigal Son, he looked at how literature is used to mediate these truths which are the great constants in life and where every person finds a home.

The Holy Family Parish hosted the Whanganui seminar which enabled more of the Sisters who work in the upper northern region to attend, and gave parishioners from the pastoral area a chance to participate.

Fr Taylor delivered his lectures in a down-to-earth style with a good deal of humour and self-honesty. They were well received by the large numbers who attended.

Fr Richard Taylor is a diocesan priest from the Salford Diocese in England and a graduate of L’Ecole Biblique in Jerusalem. He gained his doctorate in theology from Louvain University in Belgium.