The National Vocations Awareness week, 7–14 August 2016, is a week-long observance set aside by the Bishops of New Zealand and dedicated to helping those discerning God’s call to priesthood, religious, or a lay vocation.

When I was doing my OE, long before I was a priest, I visited a Benedictine Monastery near Rome at Subiaco. Chatting with one of the monks, I asked him how many were in the community. He responded: ‘you would be the fifteenth’.

A clever, affirming, seed-sowing response. The vocation of marriage necessarily entails someone asking someone else to marry them. The question is put; sometimes dramatically. It’s the same for vocations to the priesthood or to life as a Sister or Brother. Encouragement of young people to discern this call is a question, an invitation; an echo of God’s fundamental call to each of us to follow him in a particular way along a path of discovery.

I’ve just come back from a weekend retreat at Jerusalem up the Whanganui River. The focus was Vocation Discernment. Together with a Marist Father, Sisters of Compassion, and a Sister of St Joseph of Cluny we gathered with a wonderful group of young people. The question which emerges for me (and them) is ‘what next?’. So easily the quivering flame of desire to respond to God’s call can be dampened (cf Isaiah) by ordinary, daily-life routines. We get caught up in something else, which in itself is good.

Taking a ‘next step’ in a vocational journey is partially an act of the imagination. How would I fit? What would I contribute? Am I willing to let go of the familiar and embrace a partially unknown? Many find this hard. Trawling the internet for the ‘perfect’ Order or the most ‘this’ or ‘that’ Bishop, so often far from being a tool of discernment is a distraction, a form of voyeurism that conveniently leaves ‘you’ out of the picture.

At Jerusalem we quipped that of all the titles of Mary, none is ‘Our Lady of Perpetual Discernment’. Scripture is full of remarkable accounts of ‘Come Follow Me’ stories. None involve navel gazing. Abraham and Sarah are the prototypes but what of today? Recently a young person from our Diocese put it this way: ‘we are the Pompallier and Suzanne Aubert of today’.

That’s a remarkable statement. In many ways it is true. But how is this kind of insight interpreted? Towering figures of our Aotearoa faith story inspire awe yet in many ways the daily-life routine of even the greats was and is ‘ordinary’. Service; focused, committed, and selfless.

I sense that one of the main obstacles to saying ‘yes’ today is not so much a sense of unworthiness (we are all that) for the extraordinary but an un-readiness to embrace the ordinary – the daily grind, the unspectacular, the hidden and unnoticed, the disappointments – routine of life as a priest, Brother or Sister. And perhaps that is exactly the same for marriage today too.

Yet we also know that those who have been most influential in our own lives have been those who have done the ordinary in an extraordinary way – a gesture, an extended hand, an insight shared, a word of encouragement, a way they taught us, a constant being there, which shaped us for life.

The Benedictine monk’s response to me harboured a question, which in turn invited a response from me. Discernment is hard work. Responses cannot be outsourced.

Grapple with the question of Vocation. Only you can respond. But know that the journey is never alone.

A Road to Formation 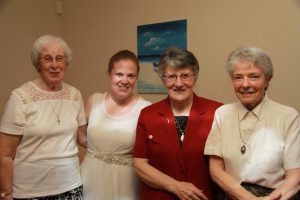 Karen Lea Englebretsen, in formation with the Passionist Sisters in Melbourne is pictured (second from left) with Srs Joan Smith, Brigid Murphy, and Anne Cunningham.

After growing up in Whanganui then moving to Palmerston North in 2011, Karen Lea Englebretsen attended a Vocations retreat in 2013 led by Bishop Charles Drennan. She is now in formation with the Passionist Sisters in Melbourne.

Life has and continues to be an adventure. After spending a few years discerning my heart’s call to religious life, there came a point when I had to take action on the words that fed me so deeply. I launched into the deep and unknown in Melbourne, to take the first step and to start the journey to join the congregation of the Cross and Passion Sisters. Together with three Irish Sisters, I experience many adventures taking a journey that brings alive the great spirit of Elizabeth Prout, our foundress, while united with Jesus in sharing who we are and who we are called to be.

It seems like not too many have walked this unfamiliar path in recent times. As I embrace it leaning heavily on the Lord, it gives me delight to share it with loved ones and let my heart overflowing with gratitude, peace and joy, shine out.

Taking the first step to say ‘yes’ to joining the community is a baby step. There is a lot more discerning to be done. Each day feels like we are on the road to Emmuas, leaving the house after Morning Prayer heading in different directions; parish work, study, helping homeless, teaching, office work, visiting and much more. During our day we meet many beautiful people, listening to their stories and sharing moments of love, joy, hardship. Returning home we gather, as Jesus taught, sharing in a meal and retelling the experiences of the day while gently offering in love a prayer for all those who we have been blessed to meet.

To quote Dr Seuss, ‘Today is your day. You’re off to Great Places! You’re off and away.’ We need to only listen to our heart to accept the invitation we are all offered in different vocation calls. The first step is often the hardest, yet believe in yourself, lean against The Lord, trust in his love and know ‘you’re too smart to go down any not-so-good street!’

What am I looking for in my life? 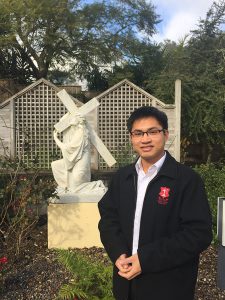 My name is Trung Nguyen and I am from Vietnam. My family is Catholic and I am one of seven children. In Vietnam my parish of 7000 parishioners has one priest, and 99 per cent of the people are practising Catholics. Daily Mass is at 5am in winter and 4.30am in summer, with three Masses every Sunday.

My vocation is based on ‘two yeses’. I became an altar boy when I was 10 years old. One morning, I went to Mass with my father as usual and he saw the priest after Mass. The priest asked if I wanted to be a server. It is customary in Vietnam for boys to assist priests as servers in parishes. I said my first ‘yes’ and that started my journey. I was 12 years old. For seven years, my main job was preparing the altar and serving at Mass every morning.

In 2007, I went to Ho Chi Minh City to study philosophy at university. I began to recognise the strength of my call to priesthood. My question was: ‘What am I looking for in my life?’ I had always wanted to be a priest and to give joy and peace I receive from God to people I meet.

During my fourth year at university in 2011, I met a priest from New Zealand in Vietnam teaching at the seminary. He invited me to New Zealand to train for priesthood. I thought and prayed for the right decision: ‘Am I brave enough to leave my country? Can I leave my family?’ After months of praying and talking to my spiritual director, I said ‘yes’. That second ‘yes’ led me to the Palmerston North Diocese.

I arrived in New Zealand in May 2012 not knowing any English. After a long period of learning English in Palmerston North I entered the seminary in Auckland in 2014. Now I am in my third year. I now feel New Zealand is my second country and Palmerston North is my home. I feel the love of the people around me. When I look back on my journey, I know I would not be here without God’s grace through the prayers of people who look after me and welcome me into their families. They talk to me as a friend and love me as they love God.

What we are called to be will bring peace and happiness to our lives. Like all vocations, there are some challenges, but the joy and peace when I am with God and people overcomes those difficulties.

Young people, remember that being a sister, a brother or a priest is always an option for your life. If you are thinking about it, feeling the call from God, talk to a priest or a trusted person you know. Parents, if your children are interested in a religious vocation, encourage them and pray for them. I would never have been brave enough to walk the path of my vocation without the courage, love and support of my parents. 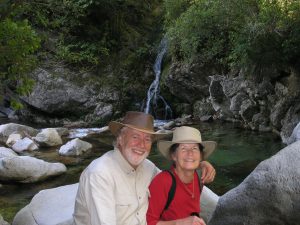 Launch Out candidate, Ben van der Wijngaart and his wife Sharon of Motueka.

A couple of years ago I overheard a parish priest at a meeting state emphatically on the subject of lay pastoral leaders, ‘Well, it’s not like they have a vocation, like priests. It’s just a job!’

I’m now in my second of four years of Launch Out formation for lay pastoral leadership and it seems it’s certainly not a job! It has been a remarkably fulfilling journey that has opened my eyes, spiritually and intellectually – and opened my heart to God in new ways. Before this, I would not have perceived I had a calling to do much more than help out in parish life in conventional ways, as in the past. I have since begun to realise my 33 years in the RAAF (Royal Australian Air Force) – nine as a trainer/consultant – as well as 10 years in politics, weren’t so much a series of careers leading to eventual retirement, as much as a preparation for an important call to use that experience as a lay pastoral leader. Talk about the ways of God not being those of man! Just when I thought it was surely time to retire seriously and not take on another job, I had my Isaiah moment.

Let me explain a bit more. I moved to New Zealand and found myself in a wonderful parish in Motueka of active laity supporting an elderly priest, knowing he would not be replaced when he retired. Something was telling me there was a need and I felt a compulsion to help using my life skills. I mustn’t be a good listener because it took me many months of prayer and mulling over to realise there was a gentle but persistent call that kept pointing me to the Launch Out ‘pad’. In the end it was easy to say ‘Here I am. Send me’.

My association with the wonderful, diverse group of people on the Launch Out programme and my own study and reflection have convinced me we are all heeding a sacred calling. It is truly a vocation that is a direct response to the Church’s call from Vatican II in Lumen Gentium to the laity who are ‘made sharers in the priestly, prophetic and Kingly functions of Christ’ (LG 31) and may be called by God and appointed by bishops to ‘spend themselves completely in apostolic labours’ (LG 41). It’s not time to retire yet, it seems, but it’s certainly not another job!