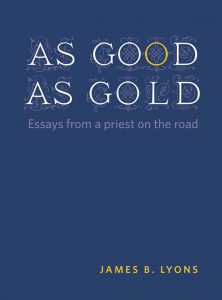 At the launch of his new book As Good as Gold – Essays from a priest on the road, Fr James Lyons was described as a ‘Renaissance Man, author, writer, homilist, and poet’. Held at Sacred Heart Cathedral’s Connelly Hall, 3 December last year, Fr James was joined by many friends, parishioners, fellow clergy and religious, writers and numerous other supporters.

As Good as Gold is written as a series of intimate details of the changes and challenges in Fr James’ pastoral life of over 50 years in ministry. Ordained in 1967, as the reforms of the Second Vatican Council (1961–65) were starting to be introduced, Fr Lyons writes of the hopes and doubts that engulfed priests and laity in the exciting aftermath of the historic gathering.

In the prologue of the book he writes, ‘I was encouraged to write my reflections as I neared the 50th anniversary of ordination, by people who believed I had something to offer; not only to “church people” but the wider and mostly secular populations, for who the Catholic priesthood, and Catholicism in general is covered in mystery, and often judged through prejudice, ignorance and misinformation.’

Grief, both personal and pastoral, the joys and frustrations of weddings, the frustrations and uncertainty surrounding clergy appointments, mission outreach and ecumenical relation, are also among the 16 essays that comprise this 186-page publication. 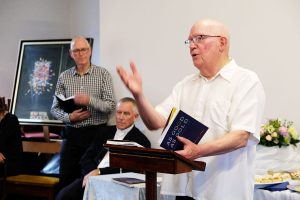 At the launch Fr James said, ‘The perceived status of a priest is as a man apart, but priests don’t live isolated lives. The call to priesthood speaks to the heart which knows the language of joy.’

In the book he writes, ‘Rather than being out in front of the people, the priest needs to be more an “enabler”, identifying and encouraging the gifts of the people to become the energy that drives and sustains the community. The priest cannot possibly “do everything”: and should never have been allowed to think he could (this is what Pope Francis writes about too) … or believe that he was expected to do everything’.

The book is illustrated with the support of several photographers, their work reflecting the theme of each essay. Thanking the photographers, Fr James said people like the book’s pictures, ‘which go a long way to help give some strength and energy to the words.’

The book sells for $40 and copies can be purchased from the Cathedral Parish Office: PO Box 1937 Wellington 6140, at $40 plus postage.

Fr James is gifting all proceeds to the Earthquake Strengthening Appeal for Wellington’s Sacred Heart Cathedral.