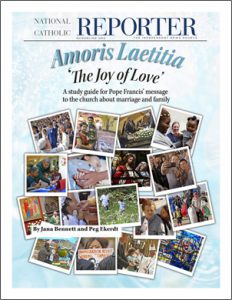 I was recently reminded it was a year to the day of the beginning of synod on the family when several of my fellow lay auditors emailed, recalling our weeks together and sharing what has been happening for them post synod and around Francis’ exhortation Amoris Laetitia – The Joy of Love’.

It has made me think about what I have done personally since the synod, what has happened locally and also overseas. For my part, I have given several talks on the synod, which have been well received, written articles and have had media interviews. It was quite pleasing that some of these were for the secular media, indicating a beyond Catholicism interest in both the synod and more particularly, the Holy Father.

Locally, the dioceses have made copies of Amoris Laetitia affordable and available for study groups. Ministries around the family, marriage preparation and relationships have used the exhortation as a valued resource as they have reviewed programmes to integrate its teachings. Lay people and clergy alike have been interested in what the exhortation had to say about discernment and conscience and how we all might have better understanding of what these might mean in both the practice of our faith and how we live our lives.

Times are changing in the Vatican too. In September, Pope Francis appointed Bishop, now Cardinal, Kevin Farrell to head the newly created Dicastery for the Laity, Families and Life, which combines several pre-existing Vatican offices into one. In an interview with the National Catholic Reporter, Cardinal Farrell said:

‘I think the pope is duly concerned about the laity and the role of the laity in the church … They’re not associated with religious orders or movements of spiritual groups. They are just ordinary, everyday Catholics. I think the pope is deeply concerned about that and wants the Catholic people to feel supported and understood, and to have a voice.’

Cardinal Farrell knows in having a voice, there is a need for the laity to have better opportunities for formation, beyond basic catechetical instruction. As Amoris Laetitia has been described as a profound reflection on the reality of family life in contemporary society, Cardinal Farrell considers Francis’ apostolic exhortation is inspired by the Holy Spirit and plans to make it his department’s guiding document. It presents a wonderful opportunity for lay Catholics’ formation as they read and discuss the document and what it means for families in general but more particularly for Catholic families within the practice of their faith.

So how do we make Amoris Laetitia our guiding document? In his introduction, Pope Francis does not recommend a rushed reading of the text and says that ‘the greatest benefit will come if each part is read patiently and carefully…. It is more likely that married couples will be more concerned with chapters four and five…’. An excellent way to do this is to form a study group, using some of the very good available study guides. I recommend the National Catholic Reporter’s Study Guide (online at: tinyurl.com/NCRs-AL-StudyGuide) and Thomas Reese’s Study guide for ‘Amoris Laetitia’ also in the same online paper (tinyurl.com/ThomasReece-AL-StudyGuide).

Most commentators agree with the Pope and recommend that lay people start with chapter four, ‘Love in Marriage’. The Holy Father says we cannot express the Gospel of marriage and family without speaking of love. More than a third of the chapter is Francis teaching and inviting us to meditate with him on the famous and often quoted St Paul’s hymn to love (1 Cor. 13:4-7). The meditation is part exhortation, part examination of conscience and Francis offers specific, practical advice on how to live love. He pays special attention to each of the characteristics of love Paul names in the letter and explores the relevance of the text for the concrete situation of every family.

The second part of the chapter is ‘Growing in conjugal love’ wherein he explores the many aspects of the day-to-day experience of love and marriage. He says there is no expectation that a union should be perfect as he recognises marriage and relationships are dynamic. Over the years of a lifelong commitment to a union, the couple experiences sharing, friendship, joy and sorrow as their love grows and matures. Francis reminds us of the importance of charity as love is freely and generously expressed in words and acts.

The final part of chapter four is a reflection on the ‘transformation of love’ as Francis addresses the reality of longer life spans, which means that close relationships may span many decades. He says marriage is a shared and lasting life project. As physical appearances change, this does not mean that love and attraction change as we love the other person for who they are.

Recently, someone told me her husband-to-be rather reluctantly attended a marriage preparation weekend as directed by their priest. He found the weekend to be immensely valuable and he learned about aspects of marriage and relationships he had never previously thought about. I think incorporation of the teaching in Amoris Laetitia in marriage and other family-life programmes will make these even more valuable. I believe that patient individual reading, and group discussion and dialogue among and between lay people and clergy, will lead to optimal learning and application of the papal teaching to the reality of family life in contemporary society.

Sharron Cole was one of the two New Zealand lay representatives at the Synod in Rome last October, where she gave a presentation and participated in the Synod discussion.