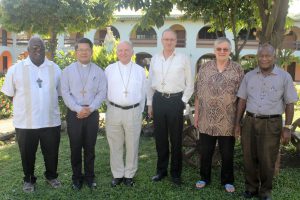 Pope Francis has announced the appointment of 17 new cardinals to the College of Cardinals, with 11 coming from places never before included. Archbishop Sir John Ribat, aged 59, of Port Moresby Diocese in Papua New Guinea was named among them. By naming a cardinal to PNG Francis has reached out to a most far-flung periphery.

Cardinal John Dew said, ‘I, and I’m sure my brother bishops in New Zealand and throughout Oceania, will be delighted to have heard the news of Archbishop Ribat’s appointment.

‘It’s wonderful for the people of Papua New Guinea to have their first ever Cardinal and within which there is a significant Catholic population. But it is also great news for the Pacific and for the Church. Archbishop Ribat is currently serving as the President of the Federation of Catholic Bishops of Oceania (FCBCO), and his elevation is cause for celebration across all of Oceania.

‘This news again shows Pope Francis’ commitment to the Church throughout the world including the smaller nations in the geographical peripheries,’ said Cardinal John.

‘Archbishop Sir John Ribat is a humble, pastoral and committed leader in his country and the wider Oceania region. This is acknowledgment of that and a call to further serve the global Church – which will benefit from the contribution of the Church in Oceania, despite our geographical distance from the rest of the world.’

Pope Francis will hold a consistory of cardinals on the vigil of the close of the Jubilee of Mercy, 19 November, during which he will formalise the new appointments.

Cardinal John Dew will attend the consistory of new Cardinals on 19 November following his attendance in Rome this month for a plenary session of the Pontifical Council for Promotion of Christian Unity and a meeting of Cardinals.