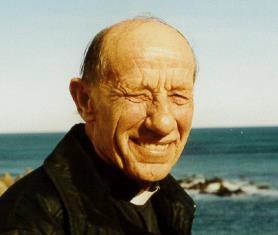 Fr Lou Leuthard, son of Eltham, Taranaki, beloved priest of the Archdiocese of Wellington, and retired resident in New Plymouth, died suddenly on the morning of Monday 29 August 2016.

Louis Henry Leuthard was born on 6 September 1927 in Eltham, son of John Leuthard and Anne Zimmerman. He was educated at St Joseph’s Convent School, Eltham, Sacred Heart College, Auckland, and Holy Cross Seminary, Mosgiel. He was ordained to diocesan priesthood on 22 July 1953 in New Plymouth by Bishop Hugh John O’Neill, then Coadjutor Bishop Emeritus of Dunedin.

Fr Leuthard was a priest of the Archdiocese of Wellington for 63 years. He had a long history working in the parishes at the top of the South Island, serving in Kaikoura, Nelson, Stoke, Takaka, Blenheim, Reefton and Westport. In retirement he lived in the Nelson parish before transferring to Omaio Village, Stoke, in 2011. A wonderful asset for the St Francis of Assisi community, he often celebrated weekday Masses there. In April this year, he moved to the Taurima Rest Home in New Plymouth, where he died peacefully.

Fr Lou’s Requiem Mass was celebrated in St Joseph’s Church, New Plymouth, on 3 September and he is buried in Te Henui Cemetery.

Cardinal John Dew said, ‘Many people have wonderful memories of this charismatic, honest, compassionate pastor and we thank God for his ministry among us. May he rest in peace.’