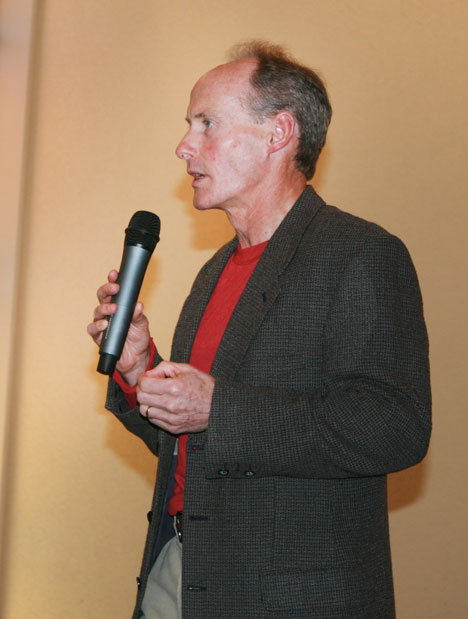 Feature: the future of archdiocesan  parishes

More than 200 people turned out on Sunday afternoon 30 June to discuss the future of parishes in the Hutt Valley with many calling for more vision and strategic planning to reach a sustainable solution.

As with other parish meetings in the archdiocese called to discuss the archbishop’s proposal to ahalve the number of parishes, people expressed deep concern at the fact that aging priests were expected to continue working.

Mary-Ann Greaney, representing Archbishop John Dew, said that with half the diocesan priests over 70 and no seminarians, continuing with the present model was a huge challenge.

‘We can’t turn priests into Mass machines. It may mean a rationalising of Masses on Sundays.’

But, she said, how many times do we come to Mass on Sunday when the church is not full?
Marist Fr Denis O’Hagan gave a graphic presentation of the kind of world we are in today with attacks on the twin towers in Washington DC, the Japan tsunami, the Christchurch earthquakes and Cave Creek setting the context for change in the Church.

If we were on the Interislander in a storm, what are we going to do? Jump overboard – many Catholics have done that – get out a lifeboat, turn around – look what happened to the Wahine when it tried to turn around in a storm – or decide to enjoy the journey, take a seasick pill and go out on deck to let the wind blow in your face.

He told a story of Pope John XXIII who, as an 80-year-old, came home from work one day and he knelt down to pray saying, ‘Well God it’s your church, not mine. I’m too tired to pray, I’m going to bed. You look after it.’

‘There’s nothing to be afraid of,’ Fr Denis said.

And, he said, ‘In a time of change, everybody disagrees with everybody else. So how are we going to get on if we can’t talk to each other?’

As President Barack Obama said, ‘We have to learn to disagree without being disagreeable.’

Mary-Ann Greaney spoke of the need to focus on the Church as vibrant communities rather than collections of buildings.

Anne Dickinson said the Hutt Valley Forum had the eight parishes in the Hutt meeting, studying and discussing together for 15 years. ‘I support those calling for vision and strategic action. We need to think way beyond accepting a proposal as it is because there are flaws.’
Others asked about lay leadership.

Margaret Luping said she had been visiting a parish in the Netherlands which had a lay pastoral leader.

‘The parish was very vibrant with a long newsletter detailing so many different groups. When the priest came back, it was obvious he and the pastoral leader worked closely together. I congratulated her and she said it takes time to get used to it. “We have been doing it for many years”.’

Mary-Ann Greaney said the Mass count and planned giving in one parish which had a lay pastoral leader had risen by 57 percent and 34 percent.

Fr Denis said the Church was a very large organisation – 17 percent of the world’s population. ‘It is very difficult to get change because we need consensus.

It will be a long time before we understand what God is saying to us. We have been blessed in the past. Some places get Mass only once a year.’

A meeting about the future of parishes in North Wellington was also recently held, at Khandallah Town Hall.