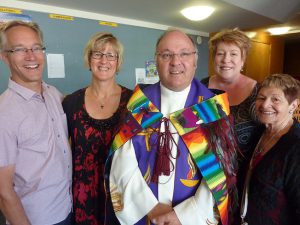 Fr Bill Warwick and parishioners from his previous parish at Plimmerton, with Shirley Kelland on the right, who responded to the welcoming karanga.

On the morning of Sunday 13 March, some 550 people joined for the Inauguration Mass for the Holy Family Parish, Nelson and Stoke. The Mass marked the amalgamation of the former parishes of St Mary’s, Nelson, and St Francis of Assisi, Stoke.

Cardinal John Dew celebrated the Mass, during which Fr Bill Warwick was installed as parish priest of the new combined parish. 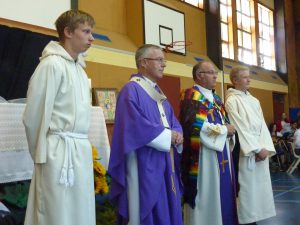 In his sermon, Cardinal John said, ‘Today we start again, two parishes are now one. We begin with excitement and anticipation because something is new – an opportunity for a fresh start. God is doing something new. Everyone in this parish has a chance to unwrap their own hidden gifts and the gifts of others. Everyone has a chance to see one another in a new way and to see in each other the miracle of the Trinity shining on the faces of brothers and sisters around us.’

The Mass began beautifully with a karanga from Garin College student, Caitlin Coates. This was answered by Shirley Kelland, one of the five parishioners who attended the Mass from Fr Bill’s former parish of St Theresa’s in Plimmerton. 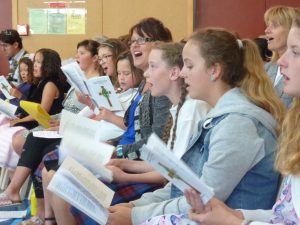 Young people from the choir.

Music featured throughout the celebration. A group of talented singers and musicians from both faith communities were trained expertly by Gabor Tolnay, St Mary’s music director. The group, aged from primary-school students to senior citizens, led the congregation in joyful praise.

Many parishioners from both communities were involved in making this Mass very special on this important occasion. Diana Clark of Nelson recorded a video of parts of the ceremony for the parish archives.