WelCom July 2017: Tim Donkin, a year 10 pupil from St John’s College, Hastings, took part in the Junior Prepared Speech section at the O’Shea Shield competition in Lower Hutt over the weekend of 13–14 May. 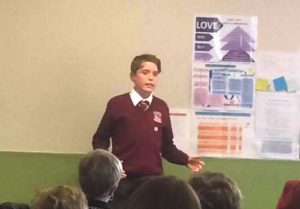 Tim Donkin ‘giving it his all’ in this Junior Prepared Speech at the O’Shea Shield competition. Photo: Supplied

Tim’s speech was titled ‘Perseverance’, which is something Tim knows only too well as he suffers from the genetic, chronic and very challenging condition of Cystic Fibrosis.

Tim’s delivery was clever and held the audience’s interest. Running through his speech, he used an analogy linking his incurable condition to a football match. Not only did Tim raise awareness of this demanding condition but the depths of his personality and humour shone through.

A significant quote from his speech was, ‘I know this is the life that God has given me, this is how He has created me and although at times I find it a hard road to travel, a hard football match to play, I am going to give it my all.’

Tim also quoted Suzanne Aubert who worked tirelessly with children and adults with incurable conditions. ‘Let us never lose courage amidst the fatigues and dangers of the journey of life.’

Tim’s section was adjudicated by the Attorney General, Hon Chris Finlayson QC. In his summary, Minister Finlayson described Tim’s speech as not just another ‘woe is me story’ but as a speech filled with hope and gritty determination, told from a very human perspective, which highlighted Tim’s bravery while delivering an awareness of the condition of Cystic Fibrosis.

Although Tim did not win his section, he was awarded a distinction. Afterwards Tim described his O’Shea Shield weekend as the best ever in his school life as he enjoyed socialising with the other students and watching the talent displayed in the different events.

This article is from Cystic Fibrosis NZ, Hawke’s Bay Branch.