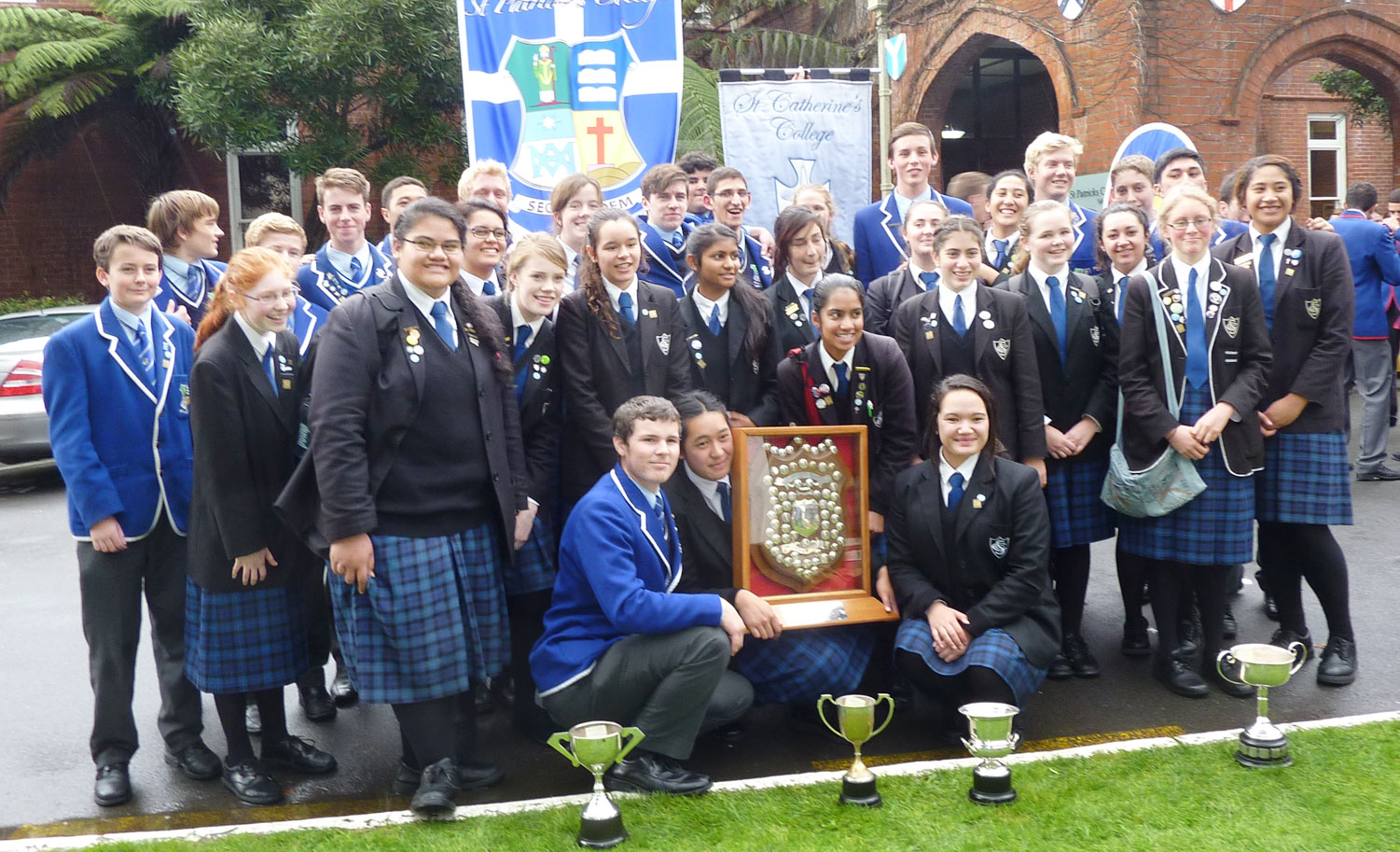 Students from St Patrick’s and St Catherine’s colleges Kilbirnie jubilant in winning the O’Shea Shield in a hard-fought competition with all colleges in Wellington and Palmerston North dioceses.

The annual O’Shea Shield public speaking contest among colleges in the Wellington and Palmerston North dioceses, presents public speaking of the highest quality, and is also an amazing forum for the faith of students.

This year St Patrick’s College Kilbirnie and St Catherine’s College finished victors in the tough tussle but there were many moments when Faith was the winner, such as the moot of the debate ‘New Zealand is a Christian Country’. I watched teams from St Catherine’s and last year’s joint winner St John’s address this issue and all six speakers argued their case confidently.

St Catherine’s for the affirmative, won by a mere five-point margin. I wonder how close that is to the reality of our country.

The Impromptu speakers showed a variety of skills, from short oratories to stand-up comedy with even a trip to the A A Milne’s 100-Acre Wood.  The Junior-Prepared speeches displayed skill, humour and personal experience such as trying to convince the audience that table tennis is ‘the’ sport, and a true reflection of what it means to be a principal’s daughter.

To speak for eight minutes without a bell and at the same time move the audience, is the task of the senior orator. The two which stood out for me were the St Patrick’s speaker Tyrun Posimani who spoke about the relationship between himself and his father, and the Cullinane College student who told of his brother in a moving commentary on the way society labels people as ‘disabled’.

For all the students involved, the highlight of the O’Shea is the five-and-a-half-minute drama held on the Saturday night. This has an exciting festive atmosphere. The dramas are based on a scripture excerpt which is interpreted by the students. The audience was entertained with a great snapshot of what Catholic teenagers understand about faith in relation to their experience of life.

On Sunday there were two events, the Scripture Reading and Religious Questions. It is the latter of these events which really test the students’ understanding of Christ, the Church and what it means to apply to life the Church’s teachings through faith. This year the texts gave an insight into the Second Vatican Council.

They dealt with what happened as well as providing an understanding of the documents concerning the Sacred Liturgy, the Church in the Modern World, and the New Evangelisation.  Serious study and the ability to apply the texts to daily living, coupled with outstanding teamwork are required for a team of three to achieve top marks. Six schools did indeed achieve top marks in this section, much to their credit.

Congratulations to our overall 2013 O’Shea Shield winners who were the two Kilbirnie Colleges, St Catherine’s and St Patrick’s. Supporters in the audience recognise the winners of each individual section for their fine achievement, and celebrate with the winning colleges, but perhaps the greatest joy is to see the friendships formed, the high standard of participants who certainly made their colleges proud, and most of all the way in which our young teenagers are living and understanding their Catholic faith.

Bishop Charles Drennan of Palmerston North said he was most impressed by the high standards of all participants both individuals and groups, and the commitment of those who had prepared them.

‘I am encouraged to see young people so competitive about activities beyond sport.’

He said he found the experience of being among the most ‘academically and artistically gifted pupils of our catholic schools’ uplifting.
And, he said he was ‘delighted’ to be served ‘decent coffee’ by St Pat’s Silverstream boys!

A surprise highlight for Bishop Charles was the personal reflections on ‘what my faith means to me’ given at the end of Mass by Cavaan Wild of Francis Douglas College, New Plymouth, and Lily Warner of Garin College, Nelson.