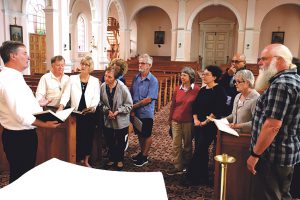 In the February issue of WelCom, Cardinal John Dew wrote about the possibility of lay people leading funeral liturgies that don’t involve a Requiem Mass. With fewer priests and with larger parishes, the number of funerals that some priests are being called on to conduct is becoming unsustainable. Funerals now include a wide variety of liturgies, such as services at the graveside only, cremations and burial of ashes, and services in rest homes.

In some dioceses around the world, bishops have formally commissioned lay ministers to celebrate funeral ceremonies to help relieve pressure on priests.

The five Lay Pastoral Leaders have completed the training and Cardinal John has mandated them to lead funeral liturgies. They will do this in consultation with the priests they work with. As Cardinal John said in his February column, their ‘main concern will be to offer the dignity of a well-prayed and well-prepared liturgy…fully in accord with Catholic teaching’.