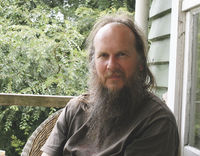 Adrian Leason is a family man – he and Shelley have seven children – and is driven by a deeply-held commitment to the world’s children, particularly those in Iraq whose daily existence is jeopardised by war.

Adrian (Adi), Dominican priest Peter Murnane and Sam Land go on trial in the Wellington District Court this month for a protest action against the NZ-funded, US satellite base at Waihopai near Blenheim.

It is not our place to judge in any way the outcome of the trial but readers may be interested to know a little more about Adi and his Christian principles.

Adi estimates that the communications facility at Waihopai is directly responsible for at least one of the 214 civilian deaths in Iraq each day of the war. The trio were arrested on April 30, 2008 when they broke through the barbed-wire-encased base and damaged the cover of one of the satellite dishes.

After the arrest and a short time in custody, Adi started parking his bus outside the United States Embassy in Wellington once a month and leading prayer and scripture study with a group of Catholic Worker supporters. The group share food and coffee and discuss the events of their lives in light of the gospel of the day.

‘The first time we did it there were 12 police with batons standing a couple of metres away while we were studying the Gospel of Mark. It’s a lovely Kiwi paradox because in another country that might be incredibly frightening but these cops are good guys – half of them will be Catholics anyway – and there was a nice rapport, friendly with goodwill. They understand what we’re doing.’ 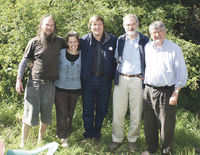 Adi credits his spiritual formation in Youth For Christ in the 1980s as a catalyst for his activism.
‘As a young person you want to do actions – you want to change the world. You want a cause that’s worth living and dying for. As you do it you start to reflect on it and it changes you and that’s called growing up.’

His vocation as a teacher and senior adviser with Child, Youth and Family nurtured his commitment to work to improve the world for children.

When he and Shelley married in 1994, they lived in the Wellington City Council’s Granville Flats for seven years and honed their political analysis skills with the most vulnerable in the community.
They campaigned over council plans for the flats and achieved ‘some good results’ while watching tenants become politicised.

‘The politics of poverty where you know you’re looked down on, where people feel deeply the hatred and rejection of society shapes the way you see the world.’

Adi quotes Mark 8:14-21 where Jesus warns his followers to be on guard against the leaven of respectability (the Pharisees) and conformity.
‘Christ was warning us 2,000 years ago. The leaven works its way through the bread and is the whole loaf conforms.
‘It’s about following the quiet voice of the Spirit into difficult places.’

The co-founder (with Dorothy Day) of The Catholic Worker Movement in the United States, Peter Moran, was a major influence with his practice of round-table discussions with the newspaper in one hand and the bible in the other ‘and allowing all of the gifts of the Spirit in all of the people present to inform the conversation’.

Waihopai
Living with refugees in Thailand and Vietnam was another formative time.
‘All the issues of the poor were our issues, too, along with the bugs and mosquitos and their diseases.’

He started to ask what he would do to save one of his children’s lives, or the life of a small child in Iraq, or Asia.
‘No price is too high,’ Adi says.
‘The evidence came through so clearly that this war in Iraq was being run by electronic intelligence. In 1998 the Americans used more munitions and cruise missiles in the first two weeks of the Desert Fox bombing campaign than in the whole first Iraq war which was just a holocaust of weaponry.
‘The country was bombed to a standstill.’

Adi says when the second Iraq war started five years later, 800 cruise missiles hit Baghdad in the first couple of days. All the information about the targets was gathered electronically through Waihopai and other Echelon listening posts around the world.

‘There’s a bureau that runs this facility. It has 40,000 volt security fences, barbed and razor wire fences four layers deep around this high-tech, super-sophisticated, listening system focused on the war on terror which is Iraq.

‘On April 30, 2008, the day we disabled the base, I believed that one person was going to die as a result of information gathered from that base and if I could disable the base for one day, one little child was going to live. That was enough for me.

‘I’m prepared to leave my farm, my kids, my job and maybe not come back for quite a while if I could save the life of one little kid. That’s what got me motivated.’

Adi says it took 40 years from the dropping of the first atom bombs on Japan in 1945 and the start of the anti-nuclear movement to New Zealand’s attaining nuclear-free status.
This, he says, is another chapter in the struggle for peace.

‘Good Kiwis are eventually going to say, “we don’t want to be associated with the mass killing of civilians as a result of intelligence gathered from our spy base”.’
‘We’re spying on the Samoans, the Tongans, the Fijians, the Indonesians the East Timorese. It’s diplomatic and corporate theft.’

As a gardener, Adi hopes one day to plant trees on Waihopai that will be allowed to grow into a peace park. ‘In the tradition of Te Whiti o Rongomai of Parihaka, this will be nonviolent direct action to claim the land.’

Meanwhile Adi says they have received terrific support from some of their fellow parishioners at St Mary’s, Otaki and he and Shelley have a sense that they belong to this parish and feel encouraged.
‘And we find ways to connect, for example, by helping to run the children’s liturgy on a Sunday morning.’

Centre left: Inside the bus parked outside the US embassy during the visit of peace activist John Dear SJ.

Bottom: The Leason family farm – they try to grow enough for themselves and to share. ‘As a Catholic Worker farm we’re trying to provide hospitality and invite people to stay.’ Baby Davy 1, Adrian, Jack 14, Che 10, Shelley, Ari 5, Finn 12, Mana 7 and Sammie 3.