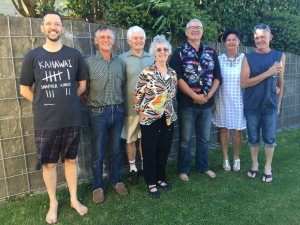 Popular and generous Palmerston North couple Josephine and Ian Bailey celebrated 60 years of marriage on Saturday 12 January with an afternoon tea with family and friends.

Settling in Woodville for the next 56 years before retiring to Palmerston North in 2014, they had six children, with sadly, Johanna dying at five months old. Josephine and Ian have 17 grandchildren and seven great grandchildren.

Their contributions to the life of communities and Church at local, diocesan and national levels has been significant. Josephine has taught Bible in Schools for 34 years, and has been involved with the Palmerston North Diocese Catholic Social Services Board, and a Cancer Society organiser for a decade.

Ian served on parish, deanery and Diocesan Pastoral Councils, the National Justice, Peace and Development council and was a national president of the Hibernian Society.

Both were involved in Marriage Preparation, Marriage Encounter and Catholic Charismatic Renewal.