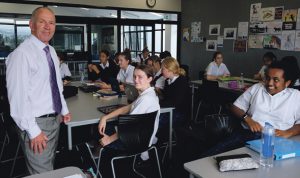 WelCom March 2018: Steve Bryan began his new appointment as principal of St Catherine’s College, Kilbirnie, at the beginning of this year.

‘The vision of excellence is very important to me,’ he says. ‘A significant part of this vision is the Catholic world view, values and virtues. These are important for the girls to take with them into their future lives and reflect the Mercy Charism.’

Mr Bryan says it’s early days yet, but already he has seen the wonderful interaction between teachers, students and the community.

The teachers aim to provide opportunities and encouragement among the students to recognise and live their Catholic faith and to embody both faith and excellence in their studies.

Mr Byran says he has been struck by the ethnic diversity at St Catherine’s. The school is proud of its bicultural and multicultural makeup. This diversity adds to the school’s special character.

As part of his new role, Mr Bryan is keen to liaise with the other Catholic secondary and primary schools in the South Wellington area and the parishes.

‘I’m making an effort to visit to build relationships and to provide support, that’s what it’s all about.’

This year, St Catherine’s College is hosting the O’Shea Shield from 12‒13 May at the College. Over the last five years St Catherine’s has won the shield four times.

Mr Bryan is keen to continue all the wonderful achievements put in place by the previous principal, the girls and staff.