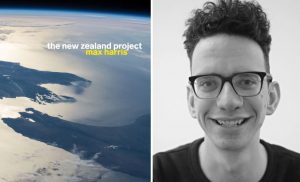 Max Harris and his book, published in April 2017.

WelCom August 2017: Max Harris is an Oxford-University-based, young New Zealand academic. He has been involved in various campaigning groups, including JustSpeak and Generation Zero, and contributes to a wide range of publications. He was in Wellington in April this year to launch his new book, The New Zealand Project.

In The New Zealand Project, Max Harris calls for values-based politics and a renewed role of both the state and the wider public in politics. He calls for ‘decolonisation, people power, and the progressive values of care, community and creativity’. He talks of a ‘politics of love’, which prioritises meaningful relationships and actively overcomes the power and domination by which minorities experience an absence of love. Harris seeks to change the language around politics, and facilitate a more accessible and inclusive discussion. He cites Pope Francis using the language of ‘nature’ over that of ‘environment’ to better reflect the independent beauty of the world apart from human beings, and our interdependent relationship with it, for example.

Harris’ proposals include an insecure work benefit, a universal basic income pilot, a carbon tax to replace the emissions trading scheme, and civics education in schools. He presents such proposals as application of his values-based approach, to a wide range of issues.

Harris writes with hope and optimism. His book demonstrates a genuine faith in people, and in the capacity of politics to serve people. I asked him where this sense of faith comes from. He said he is by nature optimistic, and is lucky to have had positive interactions with others in life. He also pointed to campaigning experiences with groups such as JustSpeak, where he encountered surprising numbers of others also passionate about important issues. In terms of inspiring this faith in others, he believes that passion and enthusiasm are contagious, but that issues must be made accessible.

Harris explained that values-based politics is not only about pursuing care, community, creativity and love, but also identifying and calling out the value judgements that lie beneath purportedly value-neutral policies, especially those that are neoliberal and individualistic.

I asked Harris about the risk of misappropriation of ‘the value of love’. He suggested this can be a problem for any value. He cited conservative misuse of ‘equality’, which reinforces racist attitudes and colonial ways of thinking. He referenced Donald Trump’s questionable use of the word ‘love’ in his speeches, and Malcolm Turnbull’s use of ‘love’ to justify a welfare drug-testing policy. Harris believes it is important to sharpen the definition of the value in question, and to explain why it is incompatible with such misuse. He suggested a power analysis is central to this understanding and explanation.

Harris also said it is not the abstract noun that is important, but rather the verb ‘to love’ and what that means. I thought again of Pope Francis who has shown a clear preference for this verb ‘to love’ over abstract theological distinctions and definitions, and I feel increasingly that we are called to follow suit.

I asked Harris why recent ‘people power’ movements have been unsuccessful. However, he questioned whether this was true, and cited the Rhodes Must Fall movement as successful in South Africa, and in Oxford to the extent that it significantly changed power dynamics. He also cited Black Lives Matter as successful, and It’s Not Our Future (Anti-TPPA) NZ as successfully changing attitudes around trade and transparency. This renews my sense of pride in the prominent role that members of our church played in this latter movement.

I asked Harris what role he thinks our church has to play in a values-based politics. He referred to the work of Christian churches on social issues and affirmed that faith institutions have something valuable to contribute to the public debate, and to the democratic landscape of experimentation. I suggested that we as a church are good in terms of care and community, but less so in terms of creativity. Harris said that creativity can take the form of unlikely coalitions on important issues, and that criminal justice advocacy could be an area for such coalitions.

As I reflect on this and on the meaning of love as a verb, I think of the prospect of such a coalition between our church advocacy groups and No Pride In Prisons, to protect the rights of those most vulnerable in prison.

I asked Harris what he considers is the most important issue for New Zealand’s upcoming general election. He referred to all forms of inequality and climate change, but quickly added that the way we talk about these issues can be problematic and can prevent deeper engagement. He said we need to get beneath the surface and see the connections between the different issues and forces such as colonisation, neoliberalism, individualism, disengagement and a denial of values in politics. Having since tried to do this myself, I know it is difficult. Perhaps this is because it requires me to take responsibility for my own perpetuation of these issues. Indeed, it requires the same of us as a church. As Harris says in his book, this is both frightening and exciting.