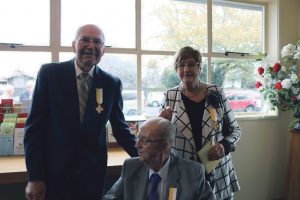 Three outstanding parishioners of Our Lady of the Valleys Parish were each awarded a Benemerenti Medal at Our Lady of Grace Church Heretaunga at Mass on 26 June. Recognised for their decades of service Gordon and Linda Holmes of Stokes Valley, together with Patrick Hewson of Heretaunga, were presented with the award, including framed certificates signed by Pope Francis. The special Mass was attended by the whole parish. Fr Tony Kearns, assisted by Fr Andrew Kim and Fr Kevin Connors, said the trio ‘had worked not for years but for a lifetime.’

At the reception after the award  ceremony, Gordon Holmes was characteristically modest. ‘All we’ve done is what people love doing,’ he said.

Pat Hewson, 89, born in Wellington, was described as a stalwart of Our Lady of Grace Church, with a singular dedication to the St Vincent de Paul Society.

Together with his late wife, Barbara, Pat had long supported the liturgy as a sacristan and, as Fr Ron Bennett wrote last year when recommending him for the award, ‘he is an outstanding Catholic’.

Gordon and Linda Holmes, both born in Lower Hutt, and of Scottish and Italian ancestry, have been the backbone of the parish, and ‘are a gentle, holy, peaceful couple’, wrote Fr Ron.

Gordon, 81, converted to Catholicism at midnight Mass in December 1965. He married Linda, a devout Catholic, in 1960. They have four children and eight grandchildren.

Linda and Gordon have supported refugees from Cambodia, Laos and Vietnam and have been foster parents. Both are daily Mass goers and Eucharist ministers. They organise Masses at a retirement home in Stokes Valley and are active in the work of the local St Vincent de Paul Society. Gordon is President of the Stokes Valley SVdP Conference and helps run the local Vinnies’ shop. He has served on the parish council for many years and Linda is also very involved with St Francis Xavier Church’s flower arrangements.

The Benemerenti Medal, established by Pope Pius VI in the 18th century, is a papal honour awarded to members of the clergy and laity for service to the Catholic Church.