The Society of St Vincent de Paul, the largest lay organisation in the Catholic Church, celebrates 150 years of service in New Zealand this year.

The Society was founded at the Sorbonne in Paris in 1833 by a group of students determined to put their faith into action. The group chose St Vincent de Paul, the renowned champion of the poor, as their patron.

The society grew quickly and was established in Christchurch in 1867, its most southern outpost. Since then, the Society has flourished in parishes throughout New Zealand, inspiring generations of Catholics to commit themselves to serving the poor and disadvantaged.

‘I want to lead a nation of joyful Vincentians who seek to serve the poor with hope and soft hearts,’ says Terry Comber, current National President of the Society. ‘I stand on the shoulders of the presidents who have gone before me over the last 150 years.’

The 150th anniversary of the Society in New Zealand will be celebrated on the weekend of 13‒15 October 2017 in Christchurch, where the first Conference in New Zealand was established. Today there are 165 Conferences throughout New Zealand, and 5,000 members. There are also many very active Conferences of ‘Young Vinnies’. Vincentians from all over New Zealand will attend the celebrations, as will Cardinal John Dew and the Society’s spiritual adviser, Bishop Owen Dolan. Vincentians from Australia have been invited as well as representatives from Samoa, Tonga, Tokelau and Sri Lanka – countries New Zealand is partnered with under the Society’s international Twinning Programme. 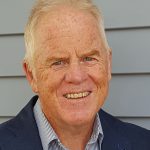 ‘It is a privilege and a blessing to be a Vincentian,’ says Terry Comber, National President of the Society of Vincent de Paul.

‘It is a privilege and a blessing to be a Vincentian,’ says Terry Comber. ‘The nature of the work can be a challenge but it is so rewarding – identifying a person or a family in need, helping out with a food parcel or paying an account and then getting to know what people really need, and supporting them further. It’s such a personal buzz to see them coping again, a real blessing, knowing you have walked the journey with Our Lord, the Christ you see in the person you have assisted.

‘The Vincentian role is not to judge the people we work with but to attend mercifully, in a Christ-like manner, to their need.’

The public face of the Society in this country is its extensive network of 62 shops – that’s as many as the Briscoes/Rebel Sports stores.

Says Terry: ‘The shops exist through the exceptional generosity of many Vincentians, a much larger number of volunteers and of course the donating parishioners and community. We are extremely grateful for the donations of clothing, food, furniture and the cash we receive. The shops provide us with the funds for our works – providing food parcels, furniture, bedding, firewood, clothing, school lunches, grocery vouchers and help with bill payments when necessary.

‘The funds also support our other programmes – assisting the settlement of immigrants, the provision of short-term accommodation, our night vans, Night Shelter, budgeting services, and our Young Vinnies programmes.’

As well as its 150th Anniversary, the Society has added reason to celebrate this year. 2017 marks the 400th anniversary of the birth of the Vincentian charism. 1617 was the year that St Vincent had several life-changing experiences which led to the establishment of three dynamic, Vincentian foundations. 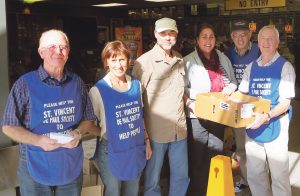 Today the Vincentian Family has over 200 branches in more than 80 countries, engaged in various ministries in which they ‘welcome the stranger’ in their midst: health care ministry, works of education-formation, works of human promotion and development, care for homeless people, for refugees, for abandoned children and for single mothers.

St Vincent de Paul World President, Renato Lima de Oliveira visited New Zealand recently. He was presented with a tokotoko – a carved Māori talking stick. At a Liturgy in Auckland he told young Vinnies that a Vincentian vocation is an excellent way of life.