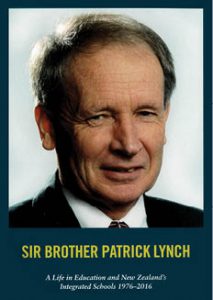 In May 2018, Sir Brother Patrick Lynch KNZM, QSO published a book outlining the history of New Zealand’s Integrated Schools. The book covers the period from the passing of the legislation that set up the Private Schools Conditional Integration Act, which became operationalised in early 1976, to when he left the CEO role at the New Zealand Catholic Education Office in mid-2016.

Sir Br Pat says the book has sold well and is an easy read. He is now offering the publication free to the Integrated school network, proprietors, principals, directors of religious studies, teachers, boards of trustees.

‘Free copies of the book are offered for Integrated Catholic school staff and Board of Trustee members, who may be interested in how our Integrated school system got to where it is now in New Zealand’s education landscape. The only requirement of a purchaser is that they agree to make a donation for the courier or postal costs. Our Integrated schools’ history is a good news story, which you may care to become more acquainted with.’

Should you like to take up this offer please email Sir Br Pat Lynch at pat.lynch@xtra.co.nz for an order form.