The Sisters of St Joseph – Te Kahui Tuahine o Hato Hohepa – are a group of Catholic women religious living and working in the North Island of Aotearoa New Zealand in partnership with many others who share a common Josephite vision. Their first foundation here and their heart-place is Whanganui. Their story began in Adelaide, South Australia in the 1860s. An English priest, Julian Tenison Woods, shared his vision with a young Australian of Scottish descent, Mary MacKillop. Both were concerned about the needs of poor and migrant families, particularly the children’s education. They gathered a group of women who Mary helped to prepare for the work of teaching. In 1866, Mary and two companions took charge of the Catholic school in Penola, South Australia. These first Josephites lived simply to be ready to move to wherever the needs arose. By the end of 1869, there were 80 young women looking after 25 schools and homes. In 1880 Sisters Hyacinth, Joseph, Clare and Teresa left New South Wales to begin the New Zealand branch in Whanganui. The first schools – a primary school and a secondary school for boarders – were opened that year. Today the Sisters of St Joseph are involved in counselling and psychotherapy; chaplaincy to prisons, rest homes and hospitals; spiritual direction; education and retreats; social justice and human rights advocacy; community and parish involvement. 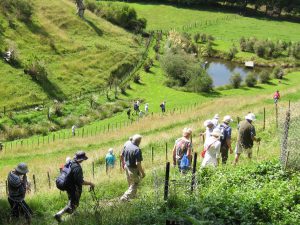 This year the Sisters of St Joseph celebrate the 150th anniversary of their foundation in Penola South Australia. In world history this is a brief period and certainly casts no shadow on the world’s stage, but for the church in Australia and New Zealand the seemingly insignificant yearnings of Mary MacKillop and Fr Julian Tennison Woods – in seeing a need and then acting on it – is following the Gospel imperative. The need was for Catholic education in the rural areas of Australia and the response was the gathering of women into a teaching congregation.

We are called by the Gospels and our Baptism ‘to put on Christ’. The symbol John uses in his Gospel is the mantle. We are not just hearers of the word but doers.

From those small beginnings the group grew and with growth comes change. Mary MacKillop had known the difficulties of being a provider for her family in early Melbourne and soon acted on the need for assistance for poor families. The ministry stretched beyond school education into social work including nursing.

The second Vatican council called for the religious of the world to return to the charism of their founders; so today the sisters are involved in a variety of ministries as needs are perceived by the congregation or are called forth by the church. This ‘return’ has taken us to other parts of the globe – Peru, Timor Leste, Brazil. Some have involved communities of sisters, others have been ‘one-off’ assistance in a particular situation. This movement also brought about a new variety of apostolic actions: adult education; counselling; spirituality centres; retreats; countering the trafficking of women; advocacy for groups with little or no voice; to name a few.

A new element has been the involvement with lay people both joining with them in projects and inviting them to join in ours. This has brought about movements of associates both formal and informal. One of the radial statements of Vatican II reminded us of the universal call to holiness. Those who are non-clerics are the laity so in mission and ministry we are one.

This celebration has added significance as it is a joyful coming together of the two groups – known colloquially as the Black Joes and the Brown Joes – who were separated by circumstances beyond the control of our founders. While this is a joyful reunion it is not without pain both for sisters and also the communities in which they’ve served. All reunion requires adjustment and this process takes time.

In New Zealand we currently have three sisters in Hastings, three in Palmerston North, 22 in Whanganui, and five in Wellington and Lower Hutt. In Whanganui we have Nazareth Rest home and Hospital (with 46 beds) and Quinlan Court for supported independent living for 20 senior citizens.

We run courses at the Josephite Retreat Centre in Whanganui to nourish spirit, mind and body and we have developed and maintain a wetland area.

We go forward today, diminished in numbers and ageing, however we adapt even in our retirement. The work of spreading the ‘Good News’ goes on.

Visit www.sosj.org.au to find out more information about us and our work.