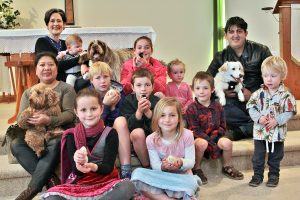 The faith community at St Francis of Assisi Church in Stoke celebrated the feast day of its patron saint, St Francis – also patron saint of ecology and peace, as reflected in the Mass and prayers of the faithful themes.

Parishioners were invited to bring their animals to Mass on Sunday 2 October for a blessing. There were 18 dogs, five week-old chickens, an opossum and Fr Bill’s bird, Jacko, who received his daily blessing. A delight to all, Jacko kept Fr Bill company during Mass as he sang and responded to Fr Bill’s voice. Pets were fed a treat after Mass.

The two former parishes of St Francis of Assisi, Stoke, and St Mary’s, Nelson, amalgamated in February this year to form The Holy Family Parish, Nelson and Stoke.