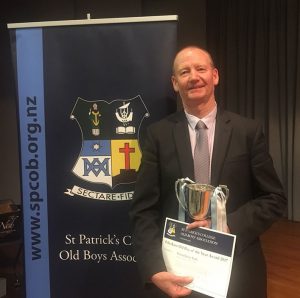 WelCom December 2017: Every year St Patrick’s College Old Boys Association (SPCOBA) gathers annually to formally recognise and celebrate one of their many outstanding past students as a recipient of the Felix Kane Cup. St Patrick’s Colleges of Wellington and Silverstream are founded on the values and leadership of the Society of Mary. The Marist priests, brothers and sisters taught at the Colleges for many years and remain the owners. College character is about developing a sense of community, treating everybody as an individual, and trying to live like Mary ‒ unseen and quietly doing God’s work. Recipients of the Felix Kane Cup have all demonstrated in some way their carrying on these values into their professional lives, families and wider communities. Chris McCarthy, a past president of SPCOBA and Chair of the Board of Trustees at St Pat’s Town, nominated the 2017 recipient. Association president George Collins delivered these words at the award presentation held in October.

“The Felix Kane Cup for Old Boy of the year recognises Old Boys who have promoted the betterment of the people of New Zealand, fostered the Catholic way of life and carried the principles taught at the St Patrick’s Colleges into the community.

The cup is named after Old Boy ‘legend’ Felix Kane who had a life-long involvement with the association starting in the late 1940s until his death in December 2009.

This year’s recipient is an Old Boy of Silverstream who attended that college between 1976‒1979 as a boarder. Earlier he was educated by the Marist Brothers in Masterton.

As a lay person, he is the only person who has been Rector of both Silverstream and Town.

During his time between his Rectorships, he worked as a facilitator for the JC Colin Team [Marist founder], and the Young Marist initiatives.

He has also been principal of the Challenge 2000 School, dealing with marginalised students.

At times he may have courted controversy in the stances he has taken in supporting Gospel values and his care for students in difficulty.

His work at the Colleges and for the wider Marist community deserves appropriate recognition. He epitomises the qualities of a Patrician through his commitment to both Colleges and to the wider New Zealand community.

He has lived ‘the Marist Principles’ learnt in his years as a student at SPC and has walked the talk in all of his actions both professionally and within his communities. He continues to espouse those values and commitment to the Gospels.”