4 Dec 2016: Suzanne Aubert, the founder of the Sisters of Compassion New Zealand’s home grown order of Sisters, has been declared ‘venerable’, a major milestone on the path to sainthood in the Catholic Church. 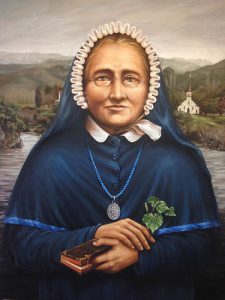 The announcement has just been made from Rome by Pope Francis.
If Suzanne Aubert’s Cause for Sainthood is successful, she will be New Zealand’s first saint, said Cardinal John Dew.
“She was a remarkable woman who devoted her life to helping others.  She was a pioneer of New Zealand’s health and welfare system and a friend to Maori throughout her life.  Her tireless compassion and practical brand of Christianity made a huge impact on New Zealand society.”
Suzanne Aubert (1835-1926) came to New Zealand from France in 1860 and spent most of her life here, fully identifying with her adopted country.
“Suzanne Aubert was ahead of her time, promoting the rights of women and Maori in the nineteenth century,” said Cardinal Dew.  “Her care for infants, young children, their mothers and families, and her practical concern for the incurably sick and unemployed was legendary.”
Being declared ‘venerable’ is a major step towards sainthood in the Catholic Church, says Dr Maurice Carmody, the promoter of her canonisation cause.
“There are a number of stages in the canonisation process. Last year the official case for her proposed canonisation was submitted to the Congregation for the Cause of Saints in Rome.  Her case has been examined by Church historians and theologians and now, with the Pope’s approval, she has been declared ‘venerable’ – the second stage on the way to being declared a saint.
“The next stage involves the recognition of a miracle attributed to Suzanne, such as recovery from a terminal illness as a result of prayer. She can then be declared ‘Blessed’ by the Pope.  A second miracle and proof that she is a model for the universal Church will enable her to be canonised as a saint,” said Dr Carmody.
Sister Margaret Anne, congregational leader for the Sisters of Compassion, said the news from Rome was very exciting for the Sisters of Compassion and for all of New Zealand.
“Suzanne Aubert was an inspirational figure in New Zealand history.   She reached out to people of all walks of life. Her huge energy and respect for all those she encountered, especially the needy, impressed a wide cross-section of New Zealanders. Her funeral was the largest ever held for a New Zealand woman.”
When she died in 1926, at the age of 91, The Evening Post said of her: Aubert “may rightly be described as one of the greatest women in public effort and loving self-sacrifice New Zealand has known.”
Suzanne Aubert was a woman of many talents. She had an in-depth knowledge of Maori herbal remedies which she combined with her medical training to develop ‘Mother Aubert’ herbal medicines. These were hugely popular throughout New Zealand. She was also expert in Maori language and tikanga, and developed a Maori – English dictionary which became a reference text for decades.
Her legacy lives on in the work of the Sisters of Compassion.  The Sisters today are still engaged in social work, pastoral care, prison and hospital chaplaincies, education, working with disadvantaged migrant communities, and care of the sick and the elderly.
They run the well-known Soup Kitchen in Tory Street, Wellington, which was begun by Suzanne and her pioneering Sisters of Compassion. They also run a dementia care unit in Upper Hutt and a housing support programme in Lower Hutt
For more information:
Dr Maurice Carmody
Roman Promoter of the Cause of Suzanne Aubert
Mob: 021 251 4042