The Season of Creation is marked throughout the Christian world from 1 September to 4 October. It celebrates the joy of creation as well as encouraging awareness-raising initiatives to protect the natural environment.

The Season of Creation is facilitated by the World Council of Churches (WCC), the Global Catholic Climate Movement, ACT Alliance, the Pope’s Worldwide Prayer Network and the Anglican Communion Environmental Network.

The 2019 suggested theme is ‘the web of life’. One million species are threatened by our lifestyle. Solving this challenge serves the Creator of all.

The Season of Creation has a special significance for the Catholic Church. In June 2015 Pope Francis issued his second encyclical, Laudato Si’ – ‘on care for our common home’. On 6 August 2015, Pope Francis announced the ‘World Day of Prayer for the Care of Creation’ to be celebrated on 1 September annually as well.

The day of prayer, the Pope said, will give individuals and communities an opportunity to implore God’s help in protecting creation and an opportunity to ask God’s forgiveness ‘for sins committed against the world in which we live’.

The beginning and the end dates of Season of Creation are linked with the concern for creation in the Eastern and the Western traditions of Christianity. September 1 was proclaimed as a day of prayer for the environment by the late Ecumenical Patriarch Dimitrios I in 1989. The Orthodox church year starts that day with a commemoration of how God created the world. On October 4, Catholics and other churches from the Western traditions commemorate St Francis of Assisi.

The proposal to celebrate a ‘Time for Creation’ during these five weeks was made by the Third European Ecumenical Assembly in Sibiu in 2007. In 2008, the WCC Central Committee invited churches to observe ‘Time for Creation’ through prayers and actions. Major Orthodox, Catholic, Protestant, and Anglican organisations have joined to encourage the 2.2 billion Christians worldwide to pray and act on ecological issues.

This year, representatives of several Christian churches, including Catholics, Anglicans, and Orthodox, are urging the faithful to see September as the ‘Season of Creation’ in an effort to raise awareness about climate change.

A letter released by the Vatican’s Dicastery for Integral Human Development on 18 June 2019 said, ‘the events held during the Season of Creation are particular to each community and include worship and prayer services as well as advocacy to limit global warming to 1.5 degrees Celsius.’

The initiative was put forth with a letter signed by Ghanaian Cardinal Peter Turkson, the head of the Vatican’s development dicastery; Archbishop Job of Telmessos, on behalf of Ecumenical Patriarch Bartholomew; Archbishop of Canterbury Justin Welby, head of Anglican Communion; and Reverend Olav Fykse Tveit, the General Secretary of the World Council of Churches.

This year’s month-long ecumenical initiative’s theme, ‘the web of life’ reflects the role humanity has as stewards of creation, but also the ‘urgent need’ to protect biodiversity.

Preparing for the Season of Creation

In response to Pope Francis call for a ‘World Day of Prayer for the Care of Creation’ to be celebrated on 1 September each year and ‘to contribute to resolving the ecological crisis which humanity is presently experiencing’, for five years now the Mercy International Association has commemorated this date as beginning the Season of Creation, marking it with prayer and resources for sharing.

MIA’s new calendar and posters, based on a water theme, are for your use during this Season and can be downloaded from: www.mercyworld.org/newsroom/preparing-for-the-2019-season-of-creation/ or tinyurl.com/MIA-Season-For-Creation 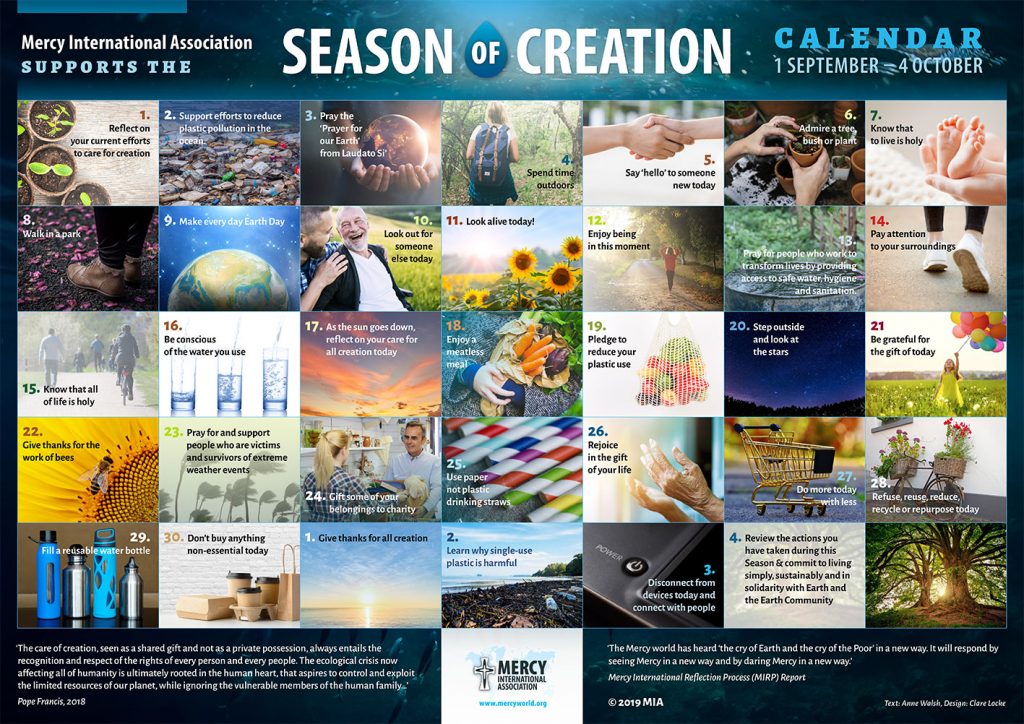