Had Mary the mother of Mercy been around today, she would have been in Christchurch with those struggling to find stability amid the rubble of last month’s big shock and the continuing aftershocks. 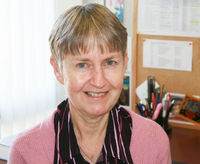 Dr Elizabeth Julian, theologian and Sister of Mercy, told a gathering celebrating the feast day of Our Lady of Mercy, Catherine McAuley their foundress would have modelled herself on the Mary of the Visitation of Luke’s gospel who went to her cousin Elizabeth in her time of need.

Perhaps Sr Elizabeth said, the Mary who is with ‘the homeless, the distraught, the grief-stricken and the severely traumatised’ by the 7.1 Christchurch earthquake of September 4, is the Mother of Mercy Catherine had in mind when she dedicated her fledgling Mercy congregation.

An important consideration for the process Catherine would have followed in determining images of Mary is that ‘the history of devotion to Mary has proved that the female figure is capable of imaging God – thus every woman is made in the image of God’. But there is a danger in such a patriarchal institution as the Catholic Church that all female symbolism of God will be lost.

‘Is it not our responsibility, therefore, as members and associates of a religious congregation dedicated to Mary, to make sure that some of the shrines, some of the devotions and some of the titles which are keeping something womanly alive, actually remain?’

Throughout history Mary has been known by countless names with each period shaping her according to its needs ‘and each image of Mary tells us as much about ourselves as it does about Mary.’

Protection image favoured earlier
A fresco of the virgin and child painted about 150 AD in the catacomb of Priscilla in Rome is thought to be the earliest representation of Mary and the earliest known prayer seems to be Sub tuum praesidium (beneath your protection) from about the third century. Mary as Mother of Mercy, painted with a protective mantle, became popular in the sixth century.
Especially for the poor, ‘such a protective image of Mary enabled them to make sense of the misery of their lives, to feel accompanied rather than abandoned and, above all, to hope’.

In the mid-1800s ‘apparitions of Mary were occurring all over Europe as ordinary people thirsted for tangible signs of the divine on earth. The great age of Mary had arrived. Catherine and the first sisters would have been influenced by this heightened devotion.’

Catherine herself was not poor, but 19th century Ireland was ‘a land made miserable’ with its people wretchedly poor, helplessly sick and hopelessly ignorant. Catherine’s ‘overwhelming sense of God’s love and mercy in her own life’ would have given her a keen awareness of the image of Mary’s protective mantle in the lives of those around her. In her rule, she exhorted her sisters to venerate and love Mary in all the devotional ways available, particularly on her feast days.

The image of the Visitation gives more of an accompanying rather than protective sense of Mary. Mary the pregnant traveller goes the distance for her older, pregnant cousin, ‘who puts her prayer into action and, above all, praises God’s mercy in her Magnificat.

A ‘moving’ experience
‘During a Eucharist (on September 8) to celebrate 160 years of Catholic education on the site of St Mary’s College, Wellington, the presider invited the cathedral congregation (mainly women) to proclaim together at the appropriate time, part of the gospel, the Magnificat. I found the experience – usually forbidden for women – incredibly moving and prayerful. Christchurch was moving literally in the aftershocks following the early morning 7.1 earthquake (four days earlier), but the ground in Wellington was moving liturgically.

‘Catherine, too, would have learned of its remarkable nature’ as a two-part song of love of God and love of neighbour, of spirituality and social justice, of contemplation and action.

‘Whichever way we decide to approach it, we immediately get caught up in Mary’s cry of joy. Mary the poor, struggling Galilean peasant woman has been chosen by God. Mary celebrates what the ‘great’ ‘saving’, ‘mighty’ and ‘holy’ God has done for her in looking on her ‘lowliness’.

A prophetic presence
Sr Elizabeth ended her tribute to Catherine McAuley on the eve of Mercy Day, September 24, saying that the Mary of the Visitation is an appropriate image of Our Lady of Mercy today because it is ‘true to our past, gives meaning to our present experience and projects a future full of hope in the midst of suffering and death…in the company of Catherine she is a prophetic presence alongside us, proclaiming God’s mercy; she is our sister, she is our tuakana, she is our kinswoman in faith.’