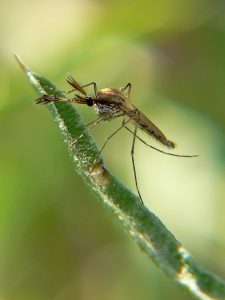 © Javier Diaz and licensed for reuse under Creative Commons Licence 2.0

Growth in the numbers of people affected by the Zika virus, spread predominantly by mosquitos, has been described as an ‘explosive pandemic’. While relatively harmless for most people, the virus is now strongly suspected – though not yet definitively proven – of being linked to a serious fetal malformation known as microcephaly. In light of that, various government health ministries in the most severely affected areas are warning women to avoid getting pregnant.

While returning from his recent visit to Mexico, Pope Francis was asked by a journalist about the dilemma this situation poses for couples and, more specifically, whether ‘abortion’ and ‘avoiding pregnancy’ (in the context clearly a reference to contraception) might be a legitimate moral response.

Pope Francis’ immediate reply was to reiterate in the strongest possible terms that abortion could never be a morally legitimate means: ‘It is a crime, an absolute evil’. In saying this he would have been aware of the intense debate in many South American countries about using abortion as a way of dealing with fetal microcephaly.

Unpacking the Pope’s endorsement of the moral legitimacy of ‘avoiding pregnancy’ is less straightforward. It is clear from the language and examples offered by the Pope that he was thinking specifically about the use of artificial contraception rather than the ‘regulation of births’ – the right of couples to space births – which is an accepted part of Catholic teaching on marriage and sexuality (see Catholic Catechism n. 2368). His analogous reference to the situation in the Congo, a 1960’s debate about giving oral contraceptives to religious sisters in grave danger of being raped, points to this. However, any doubts about the precise meaning of his words were dispelled just days later by official Vatican spokesperson, Fr Federico Lombardi, who clarified that ‘the Holy Father was indeed speaking of “condoms and contraceptives” when on the flight back from Mexico.’

Further explaining the pope’s response, Lombardi added, ‘The contraceptive or condom, in particular cases of emergency or gravity, could be the object of discernment in a serious case of conscience. This is what the Pope said.’

Pope Francis’ brief comments have raised questions about Catholic teaching on the use of artificial contraception. Some have gone so far as to suggest that it potentially heralds a reversal of the long-standing Catholic position. I am not in a position to read or know Pope Francis’ mind but, as a moral theologian, I wish to offer three points as part of my own reflection on this debate.