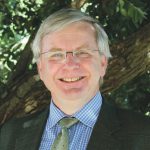 It is with sadness that WelCom acknowledges the passing of Mark Edward Richards – long-standing leader of the Diocese of Palmerston North Pastoral Services team, Cathedral Parish member, highly-regarded academic, tertiary teacher and governor for The Catholic Institute of Aotearoa New Zealand, regular columnist to WelCom, and much-loved husband of Kate Nugent Bell and father to Edward, John and Leo.

Mark received his Doctorate in Sacred Theology from the Pontifical Lateran University in Rome in June 2018. On his return to New Zealand, he was diagnosed with terminal cancer. He died on Christmas morning.

There was standing room only at both the vigil and funeral Mass at the Cathedral of the Holy Spirit. Bishop Peter Cullinane led the Mass and Monsignor Brian Walsh the vigil. Many spoke at the vigil and Mark and Kate’s three sons delivered the readings beautifully. Matthew Jansen gave the eulogy and Fr Tom Lawn gave the homily at the mass.

Mark touched and influenced many throughout his life serving as a priest and the last 25 years as a lay leader.

Deacon Danny Karatea-Goddard said, ‘Mark’s contributions to the Diocese of Palmerston North and the local church were immense. Many people have been recipients of his special initiatives in pastoral care and dedication to the catechising of communities. Justice, peace, mercy, compassion, faith and service were always on his lips.’

Matthew Jansen said Mark’s life journey has been a pilgrimage of places: Palmerston North, Wellington, Mosgiel, Napier, New Plymouth, Wellington again and a return Palmerston North. ‘In whatever role he found himself, he ministered to the person in front of him, he proclaimed the need to care for each other, he served and he led. He lent his shoulder to the restoration of this cathedral, and to the building of two churches, St Patrick’s in Napier and St Joseph’s in Wellington. All was joy for Mark, because it was all part of his pilgrimage on the road towards Jerusalem.’

Fr Tom Lawn said, ‘Let’s thank God for this son, this husband, this father, this brother, this friend, this servant of God’s people, this thirster of wisdom. He will be smiling that he died on Christmas Day.’

The Council and staff of TCI acknowledged Mark’s passionate advocacy for Catholic tertiary education, and the potential for a contemporary expression of church and ministry in Aotearoa New Zealand with well-formed lay leaders and ministers working in collaboration with bishops, clergy and religious women and men. Mark was faithful to the Christ he loved, the Gospel he proclaimed and the mission he served for the whole of his life.

‘Haere, haere, haere e hoa – go to the merciful embrace of God, and rest there in peace.’

Mark Richards will be remembered at the 9am Mass, Saturday 2 February,  St Joseph’s Church, Mt Victoria.