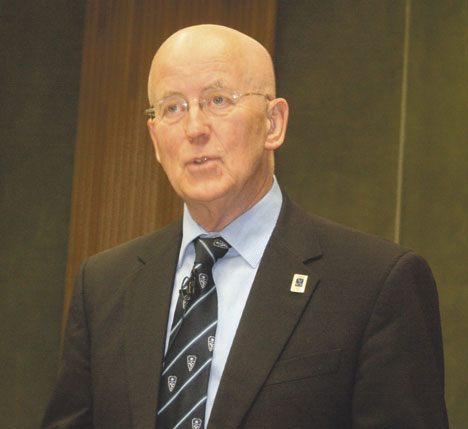 The story of Bethlehem University is one of peace in the face of severe restrictions. The vice-chancellor of the university, Br Peter Bray, told a gathering in Mt Victoria last month that, until 12 years ago, the 40-year-old university had students from Ramallah in the north of Jerusalem.

‘But since the wall has gone up we are really restricted to students from East Jerusalem, Bethlehem and Hebron.’

The whole of Israel/Palestine in which Bethlehem is situated, is a little larger in area than the combined regions of Manawatu and Whanganui.

An Al Jazeera report from 6 November 2013 says ‘Israel began work on its sprawling wall in 2002 at the height of the second intifada, and has defended its construction as a protective measure, pointing to a drop in attacks inside Israel as proof of its success. However, the Wall is not finished and if Palestinians wanted to attack they still could. The fact is, they have decided not to.

‘But Palestinians, who refer to it as the “apartheid wall”, say it is a land grab. When complete, 85 percent of it will have been built inside the West Bank.

Between the wall and some 600 other road blocks the Israelis use to restrict Palestinian movement, it can take hours for students from nearby towns to get to the university in Bethlehem at the eastern end of the Sea of Galilee.

One student, Walid, speaks of standing on the campus and looking into Jerusalem, yet he has never been there and he has never seen the sea, because he is not allowed to go through the wall.

Students show immense courage daily in their journey to and from the university.

One 17-year-old student, Lubna, talks of nearly missing her Bethlehem University entrance exam because she was detained with others at a checkpoint.

After waiting for an hour, she realised that the soldiers were not letting anyone through. So she started walking towards the checkpoint, something no one dared to do for fear of being shot.

‘Soldiers started shouting at me and I just ignored them. I just kept walking and then I was through [the 60-metre separation zone] and was able to take a taxi from the other side to get to the university.’

Br Peter told the gathering that after nearly six years as vice-chancellor he finds Oscar Romero’s reflection [see box] ‘an important way to make sense of the complexity of the situation and how I remain in peace’.

Bethlehem has been at the intersection of three continents providing for an extraordinary amount of diversity, shown by the presence of blond-haired students amid the dark Arab complexion.

Jewish people from Europe had begun buying up parts of Palestine in the 19th century.

In 1947 a United Nations resolution divided Palestine without any consultation with the Palestinians living there who were left with 43 percent of the land.

After the 1948 war, the Palestinians ended up with 22 percent. This was halved again in the 1967 war. The expansion of Israeli settlements on the West Bank has meant a greater reduction in Palestinian land which is now less than 10 percent.

To understand why the Palestinians are upset, we can look to Māori grievances over the confiscation of their land. In Palestine the process continues.

In terms of the religious context in which we operate, Br Peter said it was important to remember that Palestine is not a secular society.

Walid has never been free to worship with his community in Al Aksa mosque – he’s a Muslim.’

Bethlehem University started as a joint venture between De La Salle brothers and the Vatican. In 1973, 112 students walked onto the campus. Today there are 3,200 students and some 14,000 graduates. Its purpose was to serve the Palestinian people through education, to raise to distinction people in Palestine by providing them with education, to help young people to be who they are capable of being.

‘What we are on about is helping to build this nation,’ Br Peter said.

Three-quarters of students are women. One reason is because of the number of young people in Israeli prisons. In 2012 the president of student senate was arrested in the middle of night about three weeks before the end-of-year exams and held until about four weeks into the next semester ‘so he lost a whole year because of that’.

Faced with such threats and uncertainty for its students, the university tries to ‘create an environment where students know they are safe and that there are people who care about them – an oasis of peace’.

Visitors to the university comment on the sense of peace – an oasis of peace. Br Peter points to the attitude, nurtured at the university, of one graduate whom the Israelis have been trying to remove from his land for the past 11 years. He is not allowed to have electricity, water or other services, yet when settlers start tearing down his fences, he goes out and offers them coffee. A sign is inscribed in many languages, including English, Hebrew, Arabic, and German, on a large stone at the entrance to his land, ‘We refuse to be enemies’.

It is this attitude along with global solidarity expressed through the anti-apartheid movement and other protests against the Berlin Wall, the troubles in Northern Ireland and the 27-year Indonesian occupation of East Timor that give him hope for a resolution to the Palestinian conflict.

‘I can’t see how it’s possible for peace to come to Palestine and Israel but I am a prisoner of hope.’