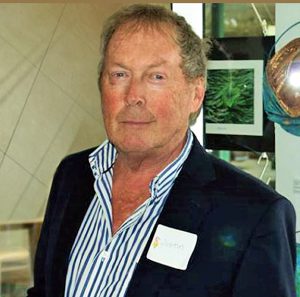 More than 500 people came to farewell their friend, brother, husband, father, uncle, media and music colleague, and fellow-parishioner at his Requiem Mass in St Patrick’s Church, Paraparaumu, on Monday 29 August.

Justin du Fresne, 74, a much-loved and highly-respected radio broadcaster of several decades and recent chair of Our Lady of Kāpiti Parish, died from cancer on 25 August, at home surrounded by his family.

Justin touched many lives. Born near Hawera and raised in Palmerston North, Pahiatua and Waipukurau, he began his broadcasting career in Wellington in the 1960s, at the age of 19. He hosted the morning show on Newstalk ZB Wellington for many years building a loyal following of listeners – several of whom paid tribute on air in the days after his passing.

His talents, drive, charisma and warmth brought immense weight to the council of the newly-amalgamated parish of Our Lady of Kāpiti, which he chaired until earlier this year.

In his eulogy for his elder brother, of whom he is immensely proud, columnist Karl du Fresne said Justin was a professional to the end, and that the organised, disciplined broadcaster – who he described as the ‘white sheep’ of the family during their childhood years – helped to organise his funeral ‘with precise instructions’.

‘I don’t think even the family realised how loved Justin was,’ Karl said. ‘If anyone wanted to see the evidence of the number of lives he touched, then just look around at the full church today.’

Parish Priest Fr Michael McCabe said Justin was a wonderful communicator and raconteur. ‘He combined his gifts of communication with a self-depreciating humour to build up, to inspire, and to affirm.

‘The gospel reading Justin chose for today, Matthew 14: 22-23, was a passage about keeping faith in difficult times. It is the story of the disciple Peter walking on water before momentarily losing faith and sinking. In the middle of the storm, precisely in the deepest moment of fear, Jesus says those beautifully reassuring words, “Courage it is I. Do not be afraid.”

‘In his final months with cancer this gospel passage reassured Justin, over and over again.’

Justin du Fresne, a parishioner at St Patrick’s, was carried out of the church as hundreds sang Amazing Grace, echoed by a rousing haka.

There has been much said and written about Justin du Fresne the beloved broadcaster. I would like to pick up from the time that Justin became an ex-personality – as we used to joke – and became a member of various parish committees.

Our Lady of Kāpiti Parish was yet to be formed, we were two parishes, St Patrick’s Paraparaumu and Our Lady of Fatima Waikanae.

The transition was complex, as the demography of the two parishes was quite different, and during this transition John Butterfield did a magnificent job as Chair.

But then Our Lady of Kāpiti came together as one parish and one voice, and who better to have the Chair than Justin du Fresne, that oh so thorough master communicator. What a bonus for all!

In addition within our parish we have a small but active group known as Our Lady of Kāpiti Events – we organise various events with the aim of raising money to help those in need.

Justin soon came to the fore in this direction, assisting with Christmas events, the ‘Festival of the Duck’, and the ‘Justin du Fresne Roast’, where experts, his own brother Karl included, took the mickey out of Justin in the name of entertainment and fundraising.

An auction item we have sometimes used, in conjunction with our marvellous caterer PartyPerfect, was a wonderful dinner party in your own home for yourself and eight or so other guests. The wine waiter and kitchen hand? – Justin du Fresne.

Then within the framework of Our Lady of Kāpiti Parish, came the need to relocate our school and to build a new church.

Quite aside, he was a driver for Kāpiti Carers ferrying the infirmed and immobile, to and fro hospital.

But alas, Justin ended up as the one in need, and now that he has gone, I don’t know that even he would have realised in how many different aspects of parish life he has left a gaping hole to be filled.

Justin was summed up beautifully by the editor of the Kāpiti News, with a caption on a picture of Justin; as, ‘Justin du Fresne…good sort’.

He would have been happy with that!

Justin du Fresne lived a life that gave so much to many. May he rest in peace.