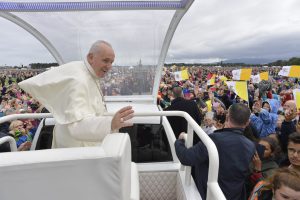 ‘God wants every family to be a beacon of the joy of his love in our world.’ – Pope Francis, Festival of Families, Ireland, August 2018

In the first major address of his apostolic visit to Ireland to commemorate the 2018 World Meeting of Families, Pope Francis, on 25 August, acknowledged the harm caused by the abuse of young people by members of the Church, including bishops, priests, and all others.

The visit coincided with the World Meeting of Families, 21–26 August, a three-yearly gathering of Catholic Church, held this year in Dublin, Ireland. The event was thrown into chaos by a Pennsylvania grand jury report issued on 14 August 2018, which detailed decades of sexual abuse and cover-ups by clerics.

‘I am very conscious of the circumstances of our most vulnerable brothers and sisters – I think especially of those women who in the past have endured particularly difficult situations,’ the Pope said. ‘With regard to the most vulnerable, I cannot fail to acknowledge the grave scandal caused in Ireland by the abuse of young people by members of the Church charged with responsibility for their protection and education…Each child is, in fact, a precious gift of God, to be cherished, encouraged to develop his or her gifts, and guided to spiritual maturity and human flourishing.

The Holy Father’s remarks came in an address to Irish authorities and diplomats in Dublin.

The Pope stressed the importance of families and the need to support them. He pointed to the World Meeting as a way to reaffirm commitment to families and celebrate their rich contribution to life, calling the family a ‘God-given vocation in society’. 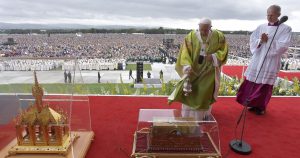 At an address to 350 married and engaged couples in Dublin’s historic Pro-Cathedral of Saint Mary’s, Pope Francis said, ‘Of all the kinds of human fruitfulness, marriage is unique. ‘It is about a love that gives rise to new life.’

At the Festival of Families event in Croke Stadium Park, on Saturday 25 August, Pope Francis said, ‘The Church is the family of God’s children and God wants every family to be a beacon of the joy of his love in our world.’

Calling the event a ‘family celebration’, the Holy Father said ‘Today in Dublin we are gathered for a family celebration of thanksgiving to God for who we are: one family in Christ, spread throughout the world. The Church is the family of God’s children.’

The Pope reminded the crowd of some 70,000 that families make up the vast majority of the People of God.

The World Meeting of Families concluded with an outdoor Mass celebrated by Pope Francis at Phoenix Park in Dublin on Sunday 26 August. Estimates of over 300,000 people attended.

At the Mass Pope Francis asked for forgiveness as he listed a litany of abuses including clerical sex crimes, a lack of compassion and action by church leaders and the separation of single mothers and children in industrial laundries.

‘Lord, sustain and increase this state of shame and repentance and give us the strength to commit ourselves so that these things never happen again and justice may be done. Amen.’

The next World Meeting of Families will be held in Rome in 2021.