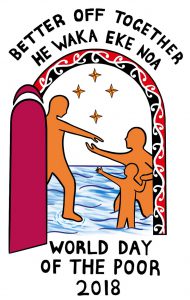 Pope Francis called a 2nd World Day of the Poor on Sunday 18 November, which invited all of us to find opportunities for encounter, dialogue and practical assistance for people on the margins.  Wellington Archdiocese was one of 12 Dioceses throughout the world who have been asked to take the lead for this day.

ARCHDIOCESE OF WELLINGTON – WORLD DAY OF THE POOR ACTIVITIES 2018

Mass for the World Day of the Poor:Over 400 people attended the Mass at St Michael’s Taita, and four large boxes of non-perishable food items were taken to the Lower Hutt foodbank.

Better off together – He waka eke noa gathering: Over 80 people met for workshops and discussion at Bishop Viard College in Porirua at the gathering hosted by Challenge 2000.

Sponsored meals at the Compassion Soup Kitchen: During the week before the World Day of the Poor, meals were sponsored and served by Ōtari and Holy Trinity parishes, Cardinal McKeefrey school, staff of The Catholic Institute, St Vincent de Paul Plimmerton, and Anna & Nigel of Wellington South parish, and Cardinal John Dew and members of the Archdiocesan Pastoral Council

Wellington JPD Commission social analysis workshop: 30 people gathered together for a day-long reflection and analysis based on the experiences of the Upper Hutt and Naenae benefit impacts

Fruitcakes for Kaikōura: 145 fruitcakes were delivered to Kaikōura by the Society of St Vincent de Paul on Tuesday 13 Nov in time for the 2nd anniversary of the Marlborough earthquake – the response was that they were received with the love and goodwill with which they were sent.

Benefit advice for low-income families in Upper Hutt: St Joseph’s parish welcomed people to check benefit entitlements, and distributed 125 sausages for lunch, and with the support of other Hutt communities distributed $1000 worth of meat packs

Collections for foodbanks: Many parishes of the Archdiocese organised special collections of food for foodbanks at Masses on the World Day of the Poor

Changes that can take place in Parishes starting from the weekend 28/29 May 2022 and ongoing restrictions.

Information provided by Alive in the Spirit Conference Convenor, Lisa Bright. The online conference is being held 26 – 28 May 2022.

The 2022 funding round for the Tindall Foundation is now open. Applications are due Friday 12 August 2022.