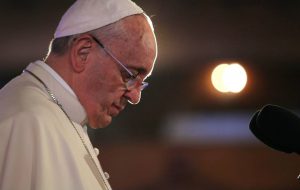 Pope Francis has convened a Summit on Safeguarding in Rome, 21 to 24 February. Photo: Wikimedia Commons

Pope Francis has convened the presidents of all the episcopal conferences throughout the world for a meeting in Rome in February this year to discuss the prevention of abuse of minors and vulnerable adults. The Holy See announced the Summit on Safeguarding last September.

Cardinal John Dew, Archbishop of Wellington and vice-president of the New Zealand Catholic Bishops’ Conference (NZCBC), will attend the summit on behalf of NZCBC President Bishop Patrick Dunn, who is unable to attend due to recent eye surgery.

The Vatican released the details on Protection of Minors Meeting, on January 16, 2019. The summit will include working groups, ‘moments of common prayer with listening to testimonies’, a penitential liturgy and a concluding Mass.

Papal spokesperson Alessandro Gisotti said in a statement that the purpose of the summit is to ensure all the bishops clearly know what they need to do to prevent and combat the worldwide problem of the sexual abuse of minors.

‘It is fundamental for the Holy Father’, Gisotti said, ‘that when the bishops have returned from the meeting in Rome to their countries and their dioceses, they understand the laws to be applied and they take the necessary steps to prevent abuse, to care for the victims, and to make sure that no case is covered up or buried.’

Andrea Tornielli, editorial director for the Vatican Dicastery for Communication, said in an editorial in Vatican News, January 10, ‘The presence of bishops from all over the world, called together for the first time to address this painful plague which has been, and is, a source of enormous suffering for victims and of counter-witness to the Gospel, will help to increase everyone’s awareness of the seriousness of the crisis. The bishops will discuss what steps must be taken to protect the victims, with respect for the truth and the people involved.

Pope Francis, he noted, has said the February meeting will seekto make past mistakes opportunities for eliminating’ the scourge of abuse ‘not only from the body of the Church but also from that of society’.

“The February meeting will seek to make past mistakes opportunities for eliminating the scourge of abuse not only from the body of the Church but also from that of society.” Pope Francis

Pope Francis said that a global problem can only be resolved with a global response. He has encouraged bishops in their own dioceses to meet with and listen to survivors of abuse.

The Vatican has also acknowledged that bishops’ conferences in many countries ‘have undertaken important initiatives and tried to understand what really happened, how to help the victims and how to establish a culture of prevention.’

Cardinal John says that listening to individuals who have been harmed is critical in our own process of learning from the past, ensuring a response of compassion and one from which our processes for safeguarding are informed. ‘In our own dioceses, bishops and congregational leaders have met and continue to meet with victims where possible.’

NZCBC encourages anyone who has been abused by a priest or religious to contact the National Office for Professional Standards (NOPS) to be heard and so that complaints can be investigated. Alternately, people may elect to go directly to the Police. The Church in New Zealand will support anyone who requires assistance to do this.

For information about the Church’s safeguarding or complaint processes in New Zealand, please email NOPS on prof.standards@nzcbc.org.nz or phone 0800 114 622.