The Sisters of St Brigid celebrated 200 years since the founding of their order with a concelebrated Mass and a sumptuous feast in Masterton last month.

The order was founded in Ireland on 1 February 1807. Bishop Daniel Delany gathered together six women to form the nucleus of the new congregation dedicated to meeting the needs of the people by providing educational opportunities. St Brigid was their patroness.

To mark the founding of the order, Bishop Delany planted an oak sapling which has grown into a great tree.

During the offertory procession at the Mass on 1 February at St Patrick’s, Masterton, the Sisters carried a bicentennial candle in a candlestick made from a branch of the oak tree and set in a larger base of NZ rimu.

‘As Brigidines, we are keepers of the light of Brigid, and draw strength and gentleness from the great oak tree of Daniel Delany, the Sisters said.

‘The light links us to the past and leads us into the future. We recommit ourselves today to passing on that flame while we search out new horizons and venture to risk the sacred journey onwards.’

During the Mass the Sisters rang a bell in memory of the young, coadjutor Bishop Delany who dared to ring the Angelus bell just after the long Penal Silence, enforced by the civil authority of the time.

(The Penal Laws were enacted in 1695 in Ireland to convert the country to Protestantism or, at least, to disenfranchise the native majority from political and economic power. Among many prohibitions, the laws forbade sending anyone overseas to attend a ‘Popish’ university or school. These laws remained in place through most of the 18th century.)

The Offertory Procession also included the Book of Names of all Brigidine Sisters who have died since 1807. 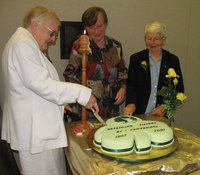 Fr William Clancy said in a tribute to the Sisters, whom he had come to know as a young curate in Johnsonville in 1950, that they had espoused their motto taken from a saying of St Francis de Sales, ‘Nothing is so strong as gentleness, and nothing is so gentle as real strength.’

Fr Clancy said that Bishop Delany had built on St Brigid’s founding of an order in the fifth and early sixth centuries.

‘Like a lot of founders of religious orders, he had groups of catechists at first providing much needed education in penal times in Ireland. He found that some left, others got married and started having families … and so the thought of a group of women taking on religious vows within a religious order was the answer.’

‘I have found (the motto of strength and gentleness) to come through in the lives of the many Brigidines I’ve known over the years.’

Fr Clancy said he’d met many former pupils of Brigidines’ schools, one in particular who said of her teacher, ‘that nun could teach stones’.

Bishop Delany faced a number of difficulties including gaining approval from the Protestant Authority and obtaining property on which to build. These were eventually overcome and the six founding women followed the spirit of Brigid of Kildare and made their commitment to God to provide education for rich and poor alike.