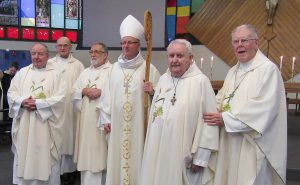 Since the Palmerston North Diocese was established in 1980, the annual celebration of ordinations are usually held at the Cathedral of the Holy Spirit. This year, because of the significant links to our city by many of the Jubilarians, the Mass was held at Whanganui.

Jubilarian Fr Earl Crotty sm said, ‘My main motive to become a priest was realising Jesus had given His life for me. I wanted to give back my life to Him.’ Whanganui born and educated, Fr Earl’s dad Eugene was a city councillor for two terms in the 1950s and for one term as Deputy Mayor. Fr Earl’s life as a priest saw him teach in Marist Colleges in New Zealand and in 1995 he moved into parish ministry.

Fr Harry Costello, 60 years a priest, grew up in County Roscommon, Ireland. After his ordination on 22 June 1958, at aged 25 he came to New Zealand responding to the call from the Catholic Church for more priests here. Called to parish ministry, he was for 20 years the Catholic Priest Chaplain at Whanganui Hospital. ‘It was a wonderful opportunity to serve in a team of workers, engaged in a common task to bring wholeness of body, mind and spirit to the patients,’ he said.

Monsignor John Carde, whose 60th jubilee story was featured in September WelCom, has always proudly owned Whanganui as his birthplace. After being ordained with Fr Earl Crotty sm in the old St Mary’s Church in Victoria Avenue on 17 July 1958, he worked in parish ministry, and spent some years in Vietnam as an Army Chaplain. His priestly story has been one of grace and trying to read the signs of its presence and live under its influence.

Born in Auckland, Fr John Roberts went to secondary school in Whanganui. Fr John’s 40th anniversary story also featured in September WelCom. After his ordination on 19 August 1978, Fr John served in parish ministry, including six years as parish priest at Holy Family Parish in Whanganui from 1992. He returned in 2006 to St Mary’s Parish where he still works.