The look of Catholic education is changing once again in Whanganui. At the beginning of the new millennium, Catholic Education was as it had always been – two schools, St Augustine’s College and Sacred Heart College. Two years into the 21st century, the Catholic Schools Board decided to amalgamate these schools into one – Cullinane College. 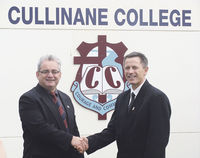 Tracy O’Brien was appointed the foundation principal of the fledgling college and he proceeded to lead it as was mandated by the foundation Board of Trustees. Mr O’Brien had come to Whanganui having led two Catholic schools in Auckland as deputy principal of Rosmini College and acting principal of Hato Petera. He returned to his position as DP at Rosmini before facing the challenge of building a new school, Cullinane, from the ground up.

The main challenge was to build a school culture that would compare with that of the founding schools. Those schools had a long tradition that would have to be overcome in order to build a new, Cullinane way of doing things. As foundation students graduated, the birth of the ‘Cullinane Way’ began to appear and, eight years on, Cullinane is beginning to show itself as a school to contend with – both culturally and academically. Mr O’Brien says he has been fortunate to have led a strong staff and that the students, inspired by this staff, are the reason for the successes that Cullinane is seeing today. Truly it is a school to be watching in the coming decade.

Now there is a new man at the helm, Kevin Shore. Mr O’Brien moves to Dunedin to head Kavanagh College and the Cullinane Board of Trustees, led by Petera Hudson, feel they have found a worthy successor who will build on Tracy O’Brien’s successes.

As an old boy and former teacher and deputy principal at St Augustine’s College, Mr Shore is familiar with Catholic education in Whanganui. When the decision to merge the two schools was made, Mr Shore went on to be one of the deputy principals at Whanganui High School where he’s been since 2001. Now he’s excited to be back in the Catholic education community.
When he takes over in the middle of Term Three, Mr Shore is looking at continuing to build the school’s profile in the community. His philosophy is to ‘try to give service to the community. If we say it will be done, it will be done’. He wants a sense of ‘active learning’ to be happening with the students and to see them fully involved in the community.

As the second principal of Cullinane College, Kevin Shore will have many challenges ahead of him that the Board of Trustees and the school community believe he will meet in the ‘Cullinane Way’.