The word ‘punish’ does not appear in the law which governs the sentencing of criminals, according to retired High Court judge, Paul Neazor.

One of three speakers on the subject, a ‘Justice that Reconciles’ at a meeting the Wellington North Pastoral Area social justice group convened in June, Mr Neazor said the Sentencing Act 2002 calls on the Court when considering a sentence to ‘have regard to the desirability of keeping offenders in the community so far as practicable and consonant with the safety of the community’, which does not necessarily fit with the current retributive and punitive trend.

Mr Neazor, who’s a parishioner of Khandallah parish, drew attention to pastoral statements on the topic made by the NZ Bishops which comment on the increasing trend towards revenge and retribution in legislation, and question the costs to the community, both human and monetary, of the increased rates of imprisonment. (See also comments from the Chief Justice Sian Elias on the subject in July 2009 www.stuff.co.nz/national/crime/2600110/Top-judge-suggests-prison-amnesty).

A judge is obliged to make sentencing decisions within the parameters set out in the Act. This provides a guide for judges whose sentences have to fall within the prescribed bands for various offences. Overall, the legislative approach in recent years has tended to be increasingly punitive, largely driven by political response to community demands.

Judges swear to ‘do right to all manner of people…without fear, favour, affection or ill-will’, which includes both offenders and their victims. The judge looks at the seriousness of the charges and the facts of the case and takes into account other input such as from the Probation Service, psychiatric reports or victim impact statements covering physical or emotional harm to the victim, loss or damage to their property, and any other effects of the crime. The primary intention is to inform the judge and to enable victim input into the criminal justice process, rather than be a vehicle to publicly shame the offender – a modern version of the stocks. Care must be taken to avoid the trend towards trial by victim impact statement.

New Zealand’s prison population was just over 4000 in 1989, when Mr Neazor was appointed. This figure has more than doubled and is climbing, making New Zealand’s one of the highest trends in the Western world. The capital cost alone is huge – as well as the $92,000 it costs annually to keep each inmate – there’s the people and community cost. Yet there is little evidence that longer prison terms have the deterrent effect which is assumed. Given that half of parolees do not return to prison within four years, the question has to be asked whether rehabilitation can be effected just as well by reducing sentences rather than increasing them. Which is more beneficial to society – longer terms of imprisonment or the successful rehabilitation and reintegration of offenders?

Mr Neazor ended by saying that any change in attitude has to come from the community itself because political responses are community driven. 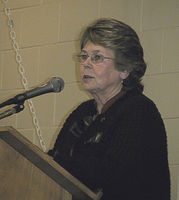 Prison chaplain Sr Marie Roche has been at Rimutaka Prison for 14 years and is one of three. Their motto – we promote wellbeing – echoes the philosophy articulated by Judge Mick Brown that punishment stops at the gate. Like Mr Neazor, she also stressed the punitive nature of our society, saying that elections are won on crime and taxes.

There are a number of rehabilitation programmes available in prison covering issues such as violence prevention, restorative justice, drug treatment, and an intensive programme for sex offenders. Special units for Maori, Pacifika and young people stress culture and spirituality. There are also transferable skills work programmes covering plant nursery, farm work, cooking, and trades. Literacy and numeracy are also taught. Some prisoners are able to study through the Open Polytechnic or Correspondence School. Strict criteria, including commitment, govern participation and huge numbers of volunteers share gifts and skills with the prisoners.

Some offenders do need to be apart from the community but, because prison is generally the least desirable option, more choices for restorative justice and rehabilitation in the community are needed. Prisoners, especially sex offenders, are the lepers of modern society, which makes it difficult for them to reintegrate into society, find employment and try to resume a normal life. The community itself needs education to take over some of the rehabilitation because we are all – including offenders and their families – members of the community.

The impact on families
Monica Robinson, formerly with PARS (Prisoners’ Aid and Rehabilitation) talked about her work with prisoners. She stressed the effects on families, particularly children, who are often traumatised by the events surrounding arrest and imprisonment. Eighty-seven percent of women in prisons are mothers and it is estimated that up to 25,000 New Zealand children have at least one parent in prison. Contact is difficult and visiting often beyond the means of families on limited incomes and with inadequate transport because the country’s three women’s prisons can be hundreds of kilometres away.
There are many good and caring people and organisations working with the families of prisoners and there is a Child Travel Fund to assist with visiting costs, but this is limited.

The question needs to be asked, ‘Who suffers most?’ when a parent, particularly a mother, serves a prison sentence.
Many of the 100 or so at the meeting felt that there needs to be an ongoing conversation on the issue. One way to keep informed and/or become involved is through the Robson Hanan Trust.

Originating from work begun in 2005, the Trust is looking to be a vehicle for informed debate, research and policy development. Its website is www.rethinking.org.nz