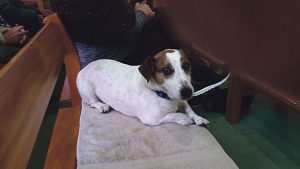 ‘Buck’ the dog that goes to church. Photo: Supplied

WelCom September 2017: There was a man who, during the 1990s, offered to regularly clean the interior of Palmerston North’s Cathedral of the Holy Spirit. He collected several like-minded people and every Monday they cleaned, with complaint, every nook and cranny. They called themselves the Cathedral Gnomes! As time went by, one by one they grew too old to do this and eventually they had to give up. The group’s leadership passed on to a new cleaner and life went on.

The man who started this remained faithful to the cathedral. He had a few ‘tricky joints’, as they say, so he got himself a four-wheel scooter and a dog to keep him company. I think the dog was to guard the scooter against theft as well. The dog, named ‘Buck’, went everywhere with the man and his scooter, including into the cathedral. No one took much notice.

In the fullness of time the man died. There was a huge funeral and the dog was sort of surplus. So the man’s son took on ownership of the dog. Because Buck was used to going to church on Sundays he kept coming, but without the scooter or its owner.

Every Sunday, the dog still comes to church. Buck calls on his friends as he finds his way up to the front of the cathedral where he eventually makes himself at home. Everyone gives his nose a wee scratch and he moves on to the next friend. Coming to the cathedral is a fairly time-consuming business for this dog with all this nose scratching.

His new ‘master’, if we can use the expression, always helps me at the altar. There a few things I can’t do because of my stroke and the dog seems to understand that. He will leave things alone as long as he can see everything. The only time I’ve seen him agitated was when someone, unknowingly, got in his line of sight. His caring instincts came out as he leapt up and out onto the carpet. Once he could see everything was fine he went back to his seat.

Buck is ‘someone’ we take for granted. He’s there and we’ll be okay. I sometimes wonder what visitors make of this. But no one seems to mind.