A Memorial Mass was held at St Mary’s Church Foxton on Sunday 15 July for the 100th Anniversary of the death of Chaplain Patrick Dore who was wounded on Gallipoli and died as a result of his wounds in Auckland in 1918. He is buried in Foxton. Mass was followed by a short graveside service at Foxton cemetery. The following excerpts are from Fr Brian Fennessy’s homily. 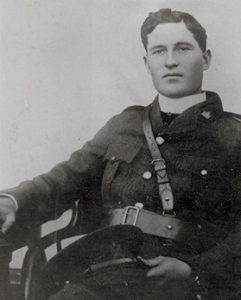 During the Great War, about 14,000 Catholic men served in the Forces. Fr Patrick Dore was one of 24 Catholic priests who served as chaplains to the Forces. He served with distinction.

Patrick Dore was born in County Limerick, Ireland. He was ordained during 1910 and arrived in New Zealand in January 1911.

Before coming to Foxton in February 1913, he had served in Palmerston North and Kaikōura. When war was declared, he offered his services as a chaplain; he was posted to the Auckland Mounted Rifles.

He had a great farewell from Foxton, including speeches, musical items, supper and a dance. Fr Dore was described as a ‘companionable man and meeting with him was always a pleasure’. In response, Fr Dore praised the efforts of the parishioners and spoke of his admiration for the lack of religious bigotry within Foxton. A quality he was to display in military service.

Fr Patrick Dore sailed with the Main Body on 16 October 1914. On transit to Europe, the Ottoman Empire entered the War, as an ally of the Central Powers; consequently, the convoy was diverted to Egypt. The Mounted Rifles came ashore at Anzac Cove just in time to reinforce the Anzac position prior to the major Turkish Attack in mid-May. Life on Gallipoli was harsh; the flies, fleas, lice, poor food, scarcity of water, disease, extreme climate, the presence of snipers, and the presence of the dead made for hardship.

In June, Fr Dore wrote a letter to a friend saying:

“I was sitting on my overcoat in my dugout – overlooking a beautiful placid sea. I was having my mid-day meal, which consisted of a tin of kippered herrings, some dry, hard biscuits, plum-apple jam, and a mug of black tea, when the postman handed me your letter. It made me feel as if I were once more in the midst of peace and good old friends.

I was saying that the front view from my dug-out is lovely – not so the back. Our good boys, gallant lads, are immediately behind, and about 100 yards away are the enemy in their trenches.

I have not said Mass for four weeks owing to the prevalence of shrapnel fire, but we meet in small numbers on Sundays, and say the Rosary. New Zealand has lost some of her best and bravest sons since we came here, but we are doing good work, of which, no doubt, you have heard.

I have all the New Zealand Catholics to attend to, and with the work of censoring a couple of thousand letters per week, I am kept busy.” 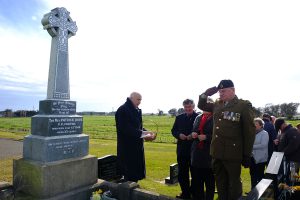 Fr Dore was critically wounded on 22 August, during the Hill 60 Offensive, and evacuated from Gallipoli. He had gone with a doctor, and four stretcher-bearers, to assist with the wounded. He was struck in the spine. A week after being wounded, Chaplain Dore wrote to Archbishop O’Shea.

“The doctors on Gallipoli didn’t hold out much hope for my recovery, but thanks to my past record of good health and kind attention I feel as well today.

The following is a description of my wound – bullet wound right hip lumber region.

The doctors are uncertain as to where the bullet went or the places it affected, however the spine got a severe shock for both my legs are partially paralysed and all organisms below my back are beyond my control at the present time. There is every hope of getting back the use of my legs again, but it will take several months’ treatment. I have offered to God the sacrifice not only of my limbs but of my life in return for the glorious work he allowed me to do on Gallipoli for our brave boys”.

Fr Dore was invalided to England and after 18 months repatriated to New Zealand.

For his action during the August Offensive Chaplain Patrick Dore was awarded the Military Cross with the citation: “Displayed most gallant conduct in helping the Medical Officer attending to the wounded under heavy rifle fire on 9th August on Chunuk Bair and for 24 hours after the withdrawal from that position”.

He was also mentioned in dispatches.

After arriving back in New Zealand in September 1916, he was able to visit Foxton to see old friends and deliver messages to soldiers’ families. For the next 22 months he spent time convalescing.

In 1918 he was once again reappointed as Parish Priest to Foxton; this time with an assistant.

Fr Dore also assumed an advocacy role for returned soldiers; he possessed an understanding and insight that was ahead of the times. The Anzac Day theme in 2018 was ‘Not all wounds bleed’; Fr Dore appreciated this reality. 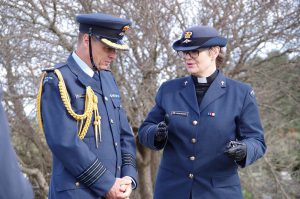 At an Anzac Day function in 1918 a soldier related a comment from Fr Dore who said that: “the returned soldiers should be trained to re-enter civil life. He had been taken from civil life and trained to forget it. He must walk like a soldier. He was perhaps under this regime for three years. He came back here with his nerves shattered and with military routine ground into his soul. He was expected at once to get into a job and assume his pre-war work. It could not be done. Perhaps the secretary of the Patriotic Society found him one job or six jobs, and he could not retain them. He should not be abandoned, but the process must be continued until he adapted himself to conditions that suited him. War does not make wasters. It makes men. It’s the people here in New Zealand who make the wasters. Train them back”.

Fr Dore was described as being, “the friend and counsellor of everyone. Wherever he went he took cheer and raised a laugh when a laugh was badly needed. During the long days of defensive war he made it his business to visit parties in the worst and most dangerous trenches, and his magnetic personality always helped to ease the load for over-burdened men. His presence was a better tonic than any the doctor could give, and he will always be kept in affectionate remembrance by Gallipoli veterans”.

Today, 100 years later, we take an opportunity to rekindle the esteem that people held for Fr Patrick Dore. He was held in great regards by a cross section of New Zealand society, especially in the Manawatu and the NZDF.