Liturgy comes from the word ‘leitaurgia’ meaning the work of the people. It’s what we do when we come together as a Catholic community to worship publicly. This happens in the Mass and the other Sacraments as well as in the Prayer of the Church.

There is a particular pattern and rhythm to the Liturgy. The Liturgical Calendar gives shape to this. It begins every year in late November or early December on the First Sunday of Advent and runs through to the Solemnity of Christ the King, the following November.

The Liturgical Year consists of the cycle of liturgical seasons. It determines when feast days are to be observed and which parts of Scripture are to be read in either an annual cycle or a cycle of several years. The ‘Lectionary’ – the Mass readings from the Bible – follows a Sunday cycle and a weekday cycle.

In each cycle of the Liturgical Calendar there are six seasons – each emphasising a part of the life of Jesus: Advent; Christmas; Lent; Triduum (three events – Holy Thursday, Good Friday, Easter Sunday); Easter; Ordinary Time. Distinct liturgical colours may appear in connection with the different seasons.

‘By means of the yearly cycle the Church celebrates the whole mystery of Christ, from his incarnation until the day of Pentecost and the expectation of his coming again’ – General Norms for the Liturgical Year and the Calendar, published by the Vatican’s Congregation for Divine Worship in 1969.

Lifting the burdens on people

This year is the Gospel of Matthew.

The Gospel of Matthew has been the most used gospel by the Catholic Church. It contains the Petrine text and five great blocks of teaching on: the Sermon on the Mount; Church Mission; the great parable chapter; leadership and ministry in the Church; the apocalyptic discourse (the teaching on the end).

The great Petrine text (you are Peter and upon this rock I build my church) has many references to the loss of salvation, external darkness; but its central light is the Jesus who lifts the burdens on people. ‘My yoke is easy, my burden is light’.

When I was a child I listened to the same two readings (the Epistle and the Gospel) at Mass on Sundays and feast days year after year – in addition to the beginning of the Gospel of John (1:1-4) which was always the Last Gospel. There were very few readings from the Old Testament. This all changed dramatically with Vatican II and the introduction of the three-year liturgical cycle (A, B, C) 30 November 1969. At the time there was great debate about the length of the cycle but the group tasked with implementing the mandate given in The Constitution on the Sacred Liturgy (1963) #51, 102, decided three years should be adequate. Apart from consulting that wonderful treasure hanging on my office wall, the Columban Calendar*, how do I know that we are now back to Year A? Simple: if the year is divisible by three then it’s Year C. 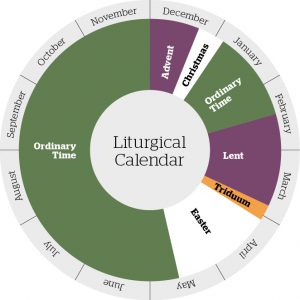 Having such a liturgical cycle means that we hear much more of the Bible than previously – in fact one-sixth of the Bible. On Sundays and major feast days there are now three readings (really five):

The First Reading is always from the Old Testament; except during Easter Season when it is from Acts of the Apostles.

The Responsorial Psalm is usually from the Book of Psalms; but sometimes from other biblical ‘Canticles’.

The Second Reading is mostly from the Letters of Paul, but sometimes from other New Testament Letters and the Book of Revelation.

The Verse before the Gospel is usually a direct biblical quotation, but sometimes it is adapted.

The Gospel is Matthew (Year A), Mark (mostly) (Year B), Luke (Year C). John is used mostly in Lent and Easter every year.

There are two Readings (really four):

• the First Reading is a semi-continuous reading alternating between the Old and New Testament; on a two-year cycle;

• the Responsorial Psalm is mostly from the Book of Psalms, but sometimes from other Canticles; also on a two-year cycle;

• the Verse before the Gospel is a specifically prescribed text;

• the Gospel is the same each year — semi-continuous readings from Mark, Matthew, Luke, in that order.

Having got the Lectionary sorted, let’s now look at the liturgical seasons and their associated colours.

The Liturgical Year – seasons and colours – in a nutshell

The time from Christmas Day until the Baptism of the Lord is called CHRISTMAS TIME (white). The remaining period until Ash Wednesday is called ORDINARY TIME (green). This year (2017) ORDINARY TIME began Tuesday, 10 January. Usually it begins the Monday after the Sunday following 6 January but this year that happened to be the feast of the Baptism of the Lord. ORDINARY TIME continues until Tuesday before Ash Wednesday inclusive. (It will begin again on Monday after Pentecost and lasts until the First Sunday of Advent.)

Easter Sunday is celebrated on the Sunday nearest the first full moon after the Spring Equinox (northern). We count backwards from there to get the six Sundays of LENT (purple) preceded by Ash Wednesday. LENT is the 40-day preparation for the Paschal Triduum. The 40 days are counted from the First Sunday of Lent until Holy Thursday. (The four days from Ash Wednesday until the First Sunday are a prelude to the season of LENT.) The Sixth Sunday of Lent is called Palm Sunday (red). The Thursday of that week (known as Holy Week) is called Holy Thursday (white). It is followed by Good Friday (red), Holy Saturday (white) and Easter Sunday (white). From Holy Thursday sundown until Easter Sunday sundown is known as the Paschal Triduum meaning the ‘three days of Passover’. These are the most important days of the Liturgical Year.

The final Sunday of the Liturgical Year is the Feast of Christ the King (usually the last Sunday in November – white).

So there we have it — the Lectionary and the liturgical calendar all sorted! For readers wanting further information on this somewhat complicated topic, Felix Just’s website is extremely helpful (catholic-resources.org/Lectionary/).

This year (Year A) we will be following the Gospel of Matthew on Sundays. Next month I will give a brief overview of the Gospel. For readers wanting to get ahead, have a look at these two short but excellent videos (tinyurl.com/YouTube-Matt-1-13 and tinyurl.com/You-Tube-Matt-14-28).

[*A Catholic calendar well-known for its traditional religious paintings and liturgical information published annually by the Columban mission society of priests. 2017 is its 97th year of edition.]