On February 10, a court inside Burma’s notorious Insein Prison sentenced my fiance, Nyi Nyi Aung, to three years hard labour in prison to punish him for his democracy advocacy. The conviction of a political prisoner in Burma is no surprise. What was a surprise was the US State Department’s measured three-line response. 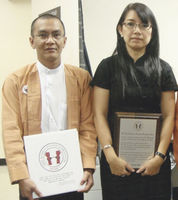 When we became Americans, Nyi Nyi and I took an oath to ‘support and defend the Constitution and laws of the United States of America against all enemies, foreign and domestic’. And yet, to the US government, Mr Aung might as well just be one of the other 2,100 political prisoners languishing in a Burmese prison. He has been horribly tortured and repeatedly denied access to both US consular officials and his lawyers.

Still, President Barack Obama and Secretary of State Hillary Clinton are silent. The State Department’s only statement came from assistant secretary Philip Crowley, saying that his imprisonment is ‘unjustified’ and urging his release.

Mr Aung was arrested by Burmese authorities at the Rangoon airport on September 3, 2009. He travelled to Burma to visit his mother who has cancer. The junta imprisoned her after the 2007 protests because of her pro-democracy activities and is denying her medical treatment.

Mr Aung, himself a peaceful democracy activist, was initially charged with violating Burma’s national security act because he was supposedly ‘breeding hardcores’, a suggestion that he was creating a new generation of activists intent on violently overthrowing the junta. In fact, he has worked independently for years as a nonviolent activist supporting numerous groups inside and outside Burma that were documenting and publicising human rights abuses and peacefully advocating for national reconciliation between the junta, the National League for Democracy and ethnic groups.

The junta soon realised that even its ‘kangaroo’ courts couldn’t sustain this accusation, so they dropped the charge and levelled a slew of more minor charges against Mr Aung. These include such supposed offences as failing to renounce his Burmese citizenship, something a junta official admitted under cross-examination he hadn’t seen anyone charged with over his 20-year career in the foreign service, according to a US Embassy official observing the trial. He was also charged with illegally importing currencies into the country, despite the fact that he was detained at Immigration before having the opportunity to declare currency at Customs.

Mr Aung was initially detained for 17 days before receiving consular access. Over much of this time, the junta denied him food and water, kept him awake around the clock and beat him repeatedly. Then, for four weeks in December and January, the junta kept him in solitary confinement in a cell, in the dark, without any bedding or a toilet, with dogs barking all around him. My lawyers tell me that these are extraordinary violations of Burmese and international law. All I know is that I cannot believe that anyone is treated this way, let alone an American.

This, unfortunately, wasn’t a new experience for Mr Aung. Back in 1988, he had been active as a high-school student organising peaceful protests of student groups and had even been detained briefly and badly tortured by the military junta. He and I fled separately to the US following the violent military crackdown on student demonstrations in Burma.

We couldn’t have been more grateful to be in the US. At last, we were citizens of a country that cherished democracy, freedom and human rights – everything that the Burmese junta stood against. We lived our own American dream; Mr Aung attained his degree in computer science from Purdue University and served in government at the US Patent and Trademark Office. I became a hospice nurse and we fell in love and got engaged.

But over the past five months our government has betrayed us. Prominent members of Congress, both Democrats and Republicans, have repeatedly asked Secretary Clinton to contact the Burmese foreign minister prior to the verdict, but she ignored these requests. This is the same administration that has also let a year pass without appointing an ambassador-ranked special representative on Burma policy, despite being required by law to do so.

So now I must speak for Mr Aung, as he has so often spoken for others. President Obama and Secretary Clinton, my message is simple. Neither your words nor your actions show that you take my fiance’s imprisonment seriously. I beg you to stop ignoring his plight, and to help secure his release from this illegal and unjust imprisonment. Just as Nyi Nyi continues to live up to the oath we took to defend America, please, live up to the promise America made to defend us.

Ms Kyaw is a hospice nurse based in Maryland.

This article was published in the Wall Street Journal on February 22, 2010.