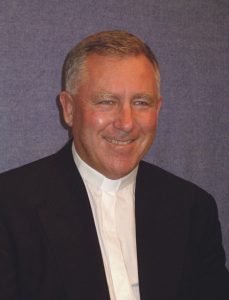 February 2016
Opinion
Cardinal John Dew
I was lucky enough and privileged enough to spend the first few days of this year walking often by the sea, swimming in the sea and being overawed at times by the size of the ocean and all its wonders. When Pope Francis spoke of an ‘Ocean of Mercy’ on New Year’s Day it had particular significance for me.
Would you rather be immersed in an ‘ocean of mercy, or a torrent of misery?’
Tuesday 12 January saw the publication of the first book Pope Francis has published as Pope. The title, The Name of God is Mercy, says so much about him and about what he is encouraging all of us to be and to do; that is, to be God-like.
At the time of writing this column I haven’t yet read the book – I am writing this on the day before its publication. However, Pope Francis has already given us enough leads to have an idea of what it is all about and what he expects of the Church. What we do know is the book offers a treatise on Francis’ understanding of mercy.
‘The Church does not exist to condemn people, but to bring about an encounter with the visceral love of God’s mercy,’ he says, conceding bluntly that Catholicism hasn’t always pulled it off.
‘When it comes to bestowing grace, Christ is present,’ he says, quoting St Ambrose. ‘When it comes to exercising rigor, only the ministers of the Church are present, but Christ is absent.’
Francis rejects ‘a formal adherence to rules and to mental schemes,’ insisting that ‘mercy is the first attribute of God’.
Just 11 days ago (at the time of writing), New Year’s Day, the Holy Father said in his Angelus message, ‘We all know that a new year doesn’t change everything, and that many problems from yesterday will still be there tomorrow (injustices and the abuse of power) but an ocean of mercy stands in contrast to the torrent of misery, swollen by sin. All of us are called to immerse ourselves in this ocean, to let ourselves be reborn, to overcome the indifference which blocks solidarity and to leave behind the false neutrality which prevents sharing.’
I found those words to be very powerful for me going into a new year and appreciated the thought of being immersed in an ocean of mercy, rather than a torrent of misery. That’s what this year of Mercy is all about and what the Pope’s new book is all about too. It is when we know God’s mercy that we are able to show mercy to others.
According to the Bible, God is mercy – in other words compassion and kindness. That compassion and kindness, love and mercy is not just for a moment, but for all time. Through our compassion we become a reflection of God’s love and share with others, people of other religions too, the concern to place mercy and kindness at the centre of our lives.
When Jesus said in Luke’s Gospel, ‘Be merciful as your Father in merciful’ (Luke 6:36), I am sure he would have been thinking of those words from Nehemiah, ‘You are a God who forgives, a gracious and compassionate God, patient and abounding in love’ (Nehemiah 9: 17). Jesus knew that we are created in the image of God. Basil of Caesarea in the fourth century summed this up well for us, ‘You come to be in the likeness of God by acquiring goodness. Acquire a heart of mercy and kindness in order to be clothed with Christ.’
The Jubilee Year of Mercy, the book The Name of God is Mercy, the words and actions of Pope Francis are all teaching us to be like God, to be people of mercy. In a world that does often seem to be in a torrent of misery – homeless and refuges, children living in poverty, violence and crimes, family squabbles disappointments and rejections – we are invited instead to know the mercy of God and become immersed in an Ocean of Mercy. It is often best and more energising to be positive rather than negative, to be merciful rather than miserable, and to make the choice to be immersed in the Ocean of Mercy, which is God all around us