WelCom April 2018: Anglican and Catholic Bishops met last month, at the Home of Compassion in Island Bay, as part of the ongoing commitment to dialogue between the two Churches on issues including homelessness, poverty, trafficking and the environment.

The Bishops gathered in prayer the evening prior to their meeting the next day, 15 March. Discussions included: 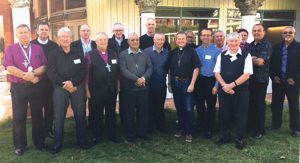 Bishop Philip Richardson who, as Archbishop, shares the leadership of the Anglican Church, said ‘Catholic and Anglican Bishops have enjoyed strong friendships over many years that have translated into co-operation on many things at a local level and across the country.’

Bishop Patrick Dunn, President of the New Zealand Catholic Bishops said, ‘the Bishops have shared some fruitful discussions on a number of issues. The meeting has been a valuable opportunity to reconnect and reflect on how we can continue to work in achieving our shared goals.’