In a matter of weeks I am to become a grandfather for the first time. It is a surprising and thrilling prospect. In my own mind I do not, of course, conform to the image of grandfather that I have long carried with me, just as I once did not conform to my image of father. But life has more imagination than I do and has decreed that this summer will be the time. I am ready with my Werthers Originals. I am up for the ride. 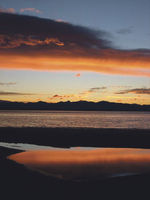 Respect for life is at its most spontaneous when a tiny new life arrives. Life is a gift, we are just part of it and here comes the next part with all its beauty and fragility and cheek and neediness. The whole of life belongs to God.
Respect for life is just the beginning when it comes to family. It’s more than respect, it’s an outpouring, a fierce love and loyalty that will move mountains to protect and nurture this new life.

But what about respect for life beyond family and friends, and one’s own immediate community? What about respect for all life because it is life and it belongs to God?
Respect for life is in short supply in New Zealand in 2009. Last month I interviewed about a dozen Pacific health providers—doctors, nurses, community workers, health managers and educators—in South Auckland and Wellington. These people are heroes of the first order trying against the odds to stem the tide of ill health and deprivation that is the lot of an increasing number of impoverished New Zealanders, disproportionately Pacific and Maori. The pattern is consistent—poverty, unemployment, sub-standard housing, poor diet, respiratory illness, malnutrition, cardiovascular disease, diabetes, obesity, mental illness—all diminishing and distorting life for so many New Zealanders, from the cradle to the grave.

This disrespect for life is a national scandal. We are only four million people and we are a moderately wealthy country. Yet we spend less than half the OECD average on children aged five and under. We have the highest youth suicide rate in the OECD and an above average child mortality rate.

A new report from the New Zealand Council of Christian Social Services says that the number of New Zealand children living in poverty has increased dramatically in the past year with 20,000 more children dependent on social welfare than a year ago. One in six kids is now born into poverty.

It is no better in education where year after year we tolerate a terribly long tail of under-achievement which prepares young people in their thousands for a lifetime of failure. The research is clear on that. We obsess about the details of high-stakes qualifications and elite education while so many kids can’t read and write after 10 years at school. Individualism is so deep-rooted in our culture that it seems okay not to care. But it’s not okay and it’s not Christian.
We are so used to this inequality. It hardly registers. The media seem tired of it, it’s not new.

But let’s be clear. Indifference to the plight of others may be culturally acceptable but it is offensive to Christian belief. All life belongs to God, all life is to be respected. In November I expect to hold a new life in my arms and dream of the life that awaits it—another spark of the divine made flesh, nothing less.