The Aotearoa Catholic Youth Festival takes place over the weekend of 2‒3 December 2017 with the theme ‘Face to Face – Kanohi ki te Kanohi’. 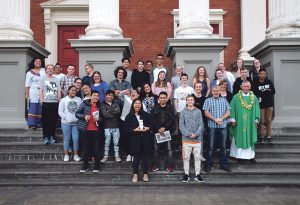 Cardinal John Dew, Life Teen Wellington and Young Church Ministry after the Archdiocese of Wellington Commissioning Mass for the festival.

The festival is being hosted by the New Zealand Catholic Bishops Conference at St Mary’s College, Auckland. Over 500 youth aged 15‒29 are expected to attend. It is an opportunity for encounter with God, the Church and other young people. The festival aims to invite and challenge young people to actively participate in and grow their local faith communities. 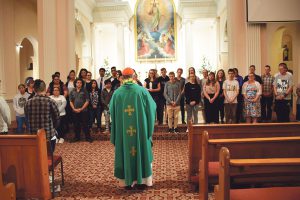 Cardinal John commissions young pilgrims from the Archdiocese as they prepare for the festival. 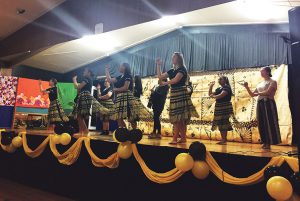 The Manawatu festival attendees organised a number of events including a hangi and a cultural concert fundraiser to help all their group get to the festival. The concert included guest performances from St James primary school choir and the Massey University Pacifica group. The Mokos Youth Group, Whaea Jamie and parents used the cooking facilities at St Peter’s College for the hangi.

On Saturday, festival highlights include a Mass, and a music and prayer session led by Canadian Christian singer-song writer Matt Maher. Following the festival, on the Sunday evening Matt Maher will headline a public concert for the Christian community of Auckland at the Victory Convention Centre, Freemans Bay. He will be joined by New Zealand performers Monique Holden and Grace Worship.