The US satellite base at Waihopai is part of a network that has been a source of information leading to the torture of innocent people in Central and South America in the 1970s, and the overthrow of the democratically elected government of Haiti in 1994 and it possibly informed the Indonesian invasion of East Timor in 1975. 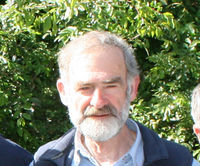 Dominican priest Peter Murnane, one of the so-called ‘Waihopai three’ told the Wellington District Court in March that, though he loves the United States as a country, he has watched with horror its military activities ‘over many decades of my life’.
Wel-com has obtained a transcript of evidence given during the trial of Adrian Leason, Sam Land and himself which led to an acquittal for the three on charges of burglary and intentional damage.
Fr Murnane apologised to the court for what he called the ‘grim topics’ of his evidence. The three admitted they had damaged the dome covering one of the two satellite dishes but he said they did so because ‘we felt it was necessary to prevent much greater evil’.
The subject of his protest has been the use of depleted uranium in Iraq and other places ‘because it causes suffering… it causes cancer and birth defects’.
He said there had been lawful, ‘and sometimes a little bit unlawful’, protest against the base since it was established in the late 1980s.
In 2008 he joined a 100-strong march through Blenheim but this and other activity including a visit to the US consul in Auckland begging him to prevent his country’s second ‘immoral and criminal’ invasion of Iraq after the deaths of two million Iraqis in the previous 12 years, has had ‘no visible effect on our government’s policy … of collaborating with the USA and sending it information 24 hours a day.’
He spoke of the ‘tragic story’ of Sr Dianna Ortizwho was ‘horribly tortured’ in Guatemala where, at the end of the 1980s, some two people a day were ‘disappearing’ at the hands of the Guatemalan government.
But she managed to escape from the torture because she was taken from the torture chamber by a man who thought they’d made a mistake because she was a nun and a US citizen. On the journey across the city in traffic to where she thought she would be killed, she jumped out of the car at the traffic lights and ran to an embassy. Somehow she managed to make her way back to the US.
Her story is in a book, The Blindfold’s Eyes, which was published in 2002 and she spoke in Auckland in 2007.
‘I spoke to her afterwards and she was scarcely able to relate to me, she was caught in the flashbacks of what she’d just been narrating. The book itself is traumatic to read.’ It proves ‘abundantly’ that the US government funded, trained and equipped the Guatemalan death squads who became her torturers.
She tells in the book about hearing a man speaking with a North American accent during one of the torture sessions. Many years after her return to the US she discovered that he was a CIA agent who went under the name, Randy Capista or Capisah.
‘She proves beyond doubt that the US ambassador to Guatemala, Thomas F Strook, was in charge of the CIA operations in the country at the time.’