Tara arrived days after violence had subsided following announcement of a new government, and the disruption meant she was not able to visit all project partners as planned. However, she did catch up with Hamahon Feto Timor (HAFOTI), an umbrella organisation for women’s groups producing various goods such as cloth, handcrafts, and food items. Caritas has been supporting the organisation since 2004.

Despite the political mayhem of the last two years, she found the groups are developing and growing. Here is some of what she found. 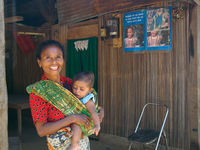 Membership of the 20 groups comprising HAFOTI has increased to 400 women and now includes five men as groups recognise that development must involve women and men.

Abenta, in charge of marketing, has been promoting HAFOTI products in Dili. Promotion cards have been distributed, and products displayed in exhibitions in Baucau and Dili. Sales have been increasing.

In Cotelau, a succo (village) about an hour south of Dili, Tara met Lisalee who, with two other women, had bought three piglets for rearing at a total cost of $NZ182. This was possible through a small loans scheme provided by HAFOTI. Loan repayments were made through cultivation and sale of vegetables in home gardens. Two of the pigs were later sold for a profit of about $NZ152. With this, Lisalee bought bamboo to repair her home, and the group bought two more piglets. Lisalee has been empowered and, as a result, has been able to improve the conditions of her life.

A group of women from another succo, Talitu, near Cotelau, applied for a government grant of $NZ1,215 to cultivate pineapples.

The 50 women, called Haburas, terraced the hillside and planted 15,000 pineapples. The expected sale price was $NZ1.50 each. Through the assistance of HAFOTI, the Haburas women have been able to generate much needed income for their families.

The group has also learned to use natural forest resources, such as shenke (cloves) and pimenta (pepper).

At the HAFOTI office in Dili, the work of the various groups is on show in a restored display cabinet damaged in 2006 rioting. Woven, sewn and preserved goods are nicely arranged, and their quality improved from Caritas’ last visit. Despite setbacks, HAFOTI is set to gain from the fruits of their members’ labour.

Meanwhile, Caritas Aotearoa New Zealand has given $NZ6,680 to Caritas Baucau in Timor Leste, to help its recovery from post-election violence in the fledgling nation, which gained independence from Indonesia in 1999.

Caritas Baucau’s offices were trashed, and its associated kindergarten burnt out, in violence which rocked parts of the country following the announcement of a new government in August.