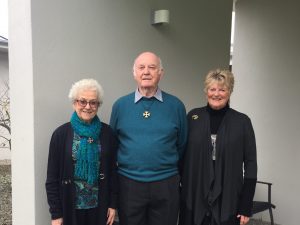 WelCom August 2017: Some meditators want to support and express their spiritual journey by becoming Benedictine Oblates of the World Community of Christian Meditation (WCCM). Oblation is a traditional form of monastic life that appeals to many on a contemplative path today. Whether single or married, young or elderly, they take monastic promises adapted to their way of life and share in several of the spiritual practices of monastic life. They meet in local cell groups for support and spiritual growth.

In New Zealand there are 20 fully professed Oblates, as well as seven novices and one postulant in formation. The Wellington and Hawke’s Bay cell groups gathered recently at Southern Star Abbey, Kopua, where Kathy Egan from Napier was received as a novice and Shirley Duthie from Otane, Central Hawkes Bay, was fully professed as a Benedictine Oblate. Hugh McLaughlin, the New Zealand co-ordinator of the Benedictine Oblates of the WCCM and Fr John Pettit of Southern Star Abbey, conducted the ceremony.

Oblates have been around since the time of St Benedict in the sixth century. The term ‘oblate’ comes from Latin, meaning ‘to offer’. In the beginning, Oblates were children offered to the monastery by their parents. Over time, the term ‘oblate’ came to mean lay people outside the monastic enclosure who were connected with a particular monastery, and deeply informed by the monastic way of life.

Visit wccm.org/content/becoming-oblate to learn more about WCCM and becoming an Oblate.