Over 40 parishioners, and a dog, joined Msgr Gerard in Buckle St – the area of Wellington Mother Aubert put down roots in the city. The group began a 6km walk from the site of the first New Zealand children’s crèche established by Suzanne Aubert in 1914, and near the first Soup Kitchen site she began in 1901, to the Home of Compassion in Island Bay. 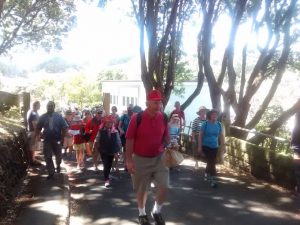 St Joseph’s has had a long and proud association with Blessed Suzanne Aubert and her Sisters of Compassion. The first St Joseph’s Church was built in Buckle St in 1885, next to the former location of St Patrick’s College Wellington.

With St Joseph’s, St Bernard’s, St Anne’s and St Frances de Sales becoming the Parish of Wellington South, the walkers went by St Anne’s for other parishioners to join them. They arrived at Island Bay’s Home of Compassion for a joint parish picnic. There 150 parishioners enjoyed the company of old and new friends in perfect weather. Their combined new parish will take the name of Suzanne Aubert when she is beatified.

Sisters of Compassion Congregation Leader Sr Margaret Anne Mills said, ‘It is wonderful this parish set out to walk the streets Suzanne and her sisters walked, as a pilgrimage. The sisters were a familiar site around this part of Wellington pushing prams with donated food for the poor.’

Msgr Gerard said, ‘The walk serves to remember Suzanne and the first sisters who did so much to help the poor of Wellington. Their work continues and our support is just as important today.’

The gathering was like a parish picnic of days gone with sack races and a tug of war, won with much delight by the well co-ordinated women’s and girls’ team beating the men and boys.

Maureen Cahill and Yvonne Taliauli organised retro-games with gumboot throwing, sack races, tug-of-war, sprints and a fitness session. For shelter, tours of the museum with exhibits of Suzanne Aubert’s life and work were of much interest. 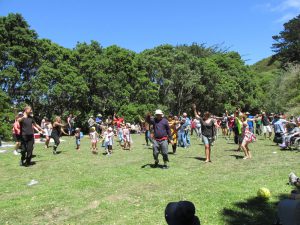 Msgr Gerard said Deirdre Hanlon and the other picnic organisers did a fabulous job. ‘It was wonderful for the Sisters of Compassion to host us all and help us celebrate many parts of the parish becoming one on this fun day with the Suzanne Aubert walk and “mad” picnic games. From a personal point of view I couldn’t think of a better way to farewell St Joes.’

To accommodate the new road system in Buckle Street, the Home of Compassion crèche was moved 15 metres from its original position and, in 2015, beautifully restored. The former crèche now sits within the new Pukeahu National War Memorial Park. It is known as the Pukeahu Education Centre with no reference to the building’s original purpose nor its founder Suzanne Aubert. Hopefully this will be rectified.