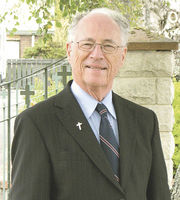 The bishops have been asked why they have not publicly supported the three men who were charged with damaging public property at Waihopai. I think there are several reasons, and I am speaking only for myself. First, let me focus the question even more cogently: why wouldn’t anyone who accepts that these men believed they were acting lawfully, who respects their passion for justice, who accepts the need for all of us to be challenged to think about what is happening, and who shares their contempt for the abuse of power by a super power whose violations of human and democratic rights are a matter of historical record even while it teaches its own children that its values are good for the rest of the world – why wouldn’t such a person want to support the actions taken at Waihopai?

So even though people in need of folk heroes are always going to back David against Goliath, we still need to see if Goliath was actually there, that is, whether the action taken at Waihopai was going to make any difference to what happens in Afghanistan; because if that is uncertain, then the moral justification for the damage done at Waihopai becomes tenuous to say the least.

The defendants were simply sure that even the temporary shutdown of the Waihopai facility saved lives. To believe that, you have to believe that the US Military would allow its operations to depend on the full-time functioning of an individual satellite station. I imagine that anyone who believes that would have less difficulty than most of us in being sure of themselves.
Perhaps, too, I missed something in the reasoning of those who don’t seem to address the claim that maybe lives are being saved as a result of intelligence gained through satellite stations.

It is precisely in the face of such uncertainties that the Catholic moral tradition becomes so relevant. We cannot talk intelligibly about carrying out a lesser evil to avoid a greater one unless we know both the harm that will be done by our actions and the degree of likelihood that the hoped-for greater good will actually happen.

The Catholic moral tradition has realism on its side when it requires a proportionately certain, direct and proximate connection between actions that will cause harm and the good being intended.
In calculating the harm done by the action at Waihopai, it is necessary to include the moral harm of reinforcing the already widespread and destructive assumption that the end justifies the means because this is how it will be perceived by those who do not understand the narrow legal question the jury had to decide.

The bishops also have an obligation to support those parents who are trying to teach their children that destroying other people’s property is not okay, to say nothing of trying to explain why it is not okay to destroy clinics where thousands of innocent lives are being taken – far more than in Afghanistan.

The potential for harm resulting from the actions done at Waihopai, taken together with a defence based on condoning those actions, is a big price to pay if the intended good is really only a hope and a gamble.
Given what has to be included in calculating the harm and potential harm from the actions at Waihopai, and given the difficulties of knowing how likely it was that a greater good would in fact be achieved, I was not impressed by the simplistic comparison made between ‘protecting lives and protecting plastic’ and even less impressed by a seemingly cavalier attitude to who should pay the bill. Should that be determined by the subjective factors that enabled the perpetrators to elude criminal liability or should it be determined by whether the actions themselves were lawful?

We also have to respect the fact that our government has defence responsibilities throughout the South Pacific and that in the real world this necessarily involves gathering intelligence and collaborating with allies and that having such a base does not necessitate the surrender of its operations and control to any other nation. What the base is used for is within the power of our own government to decide.

So the issue comes down to what is the morally responsible way of influencing our government’s thinking within this democracy. Is it responsible to condone physical attacks (euphemistically described as ‘non-violence’) on government agencies?

I do not think so. This is my answer to the question asked of the bishops. But there are bigger questions. The same principles I have applied to what was done at Waihopai apply to what is being done in Afghanistan. We have to ask whether, on an even larger scale, there is disproportion between the harm being done and any hoped-for good to be achieved. In the Catholic tradition there is a morality of the means as well as a morality of the ends.

Bishop Peter Cullinane is Bishop of the Palmerston North Diocese.