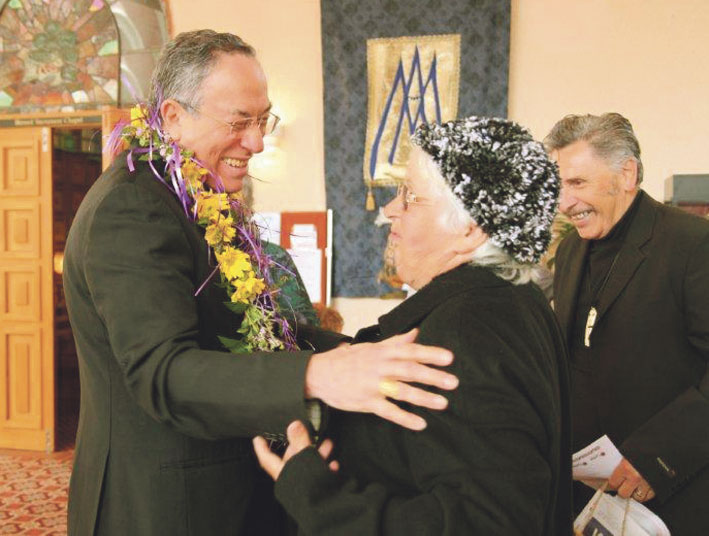 New Zealand church people are full of hope after the visit last month of the chair of the Council of eight cardinals who are helping the pope reform Vatican administration.

Cardinal Oscar Rodriguez Maradiaga SDB of Honduras visited Wellington unexpectedly 10 to 12 October immediately after the inaugural meeting of the Commission of Cardinals and the Pope’s visit to Assisi.

He was in Wellington as President of Caritas Internationalis to meet Caritas Aotearoa New Zealand staff but was also able to meet New Zealand’s Catholic bishops gathered in Wellington.

‘It was a great privilege having him here. The discussions with him made us all feel more connected to the Holy See and to the Holy Father. He has given us a sense of hope and excitement,’ Archbishop John said.

‘He really listened in his discussions with us, which is an example of the kind of dialogue for which Pope Francis has been calling,’ he said.

‘We were inspired by what the Cardinal said to those gathered during the whakatau on Friday morning to welcome him, that when Pope Francis says to go out to the periphery, he means not only to those who are poor and marginalised but also to those parts of the Church, like New Zealand, which are geographically distant.’

Cardinal Rodriguez said that although he could not understand much of what was said in te reo, the language of love and warmth was communicated through signs and gestures.

‘He told us he loved the whakatau, the speeches, the singing, the flower garlands. It made him feel not just welcome, but accepted into our midst,’ Archbishop John said.

‘Although here for a short visit I’m sure he will remember for a long time what he witnessed of the vibrant faith community here in Aotearoa.’